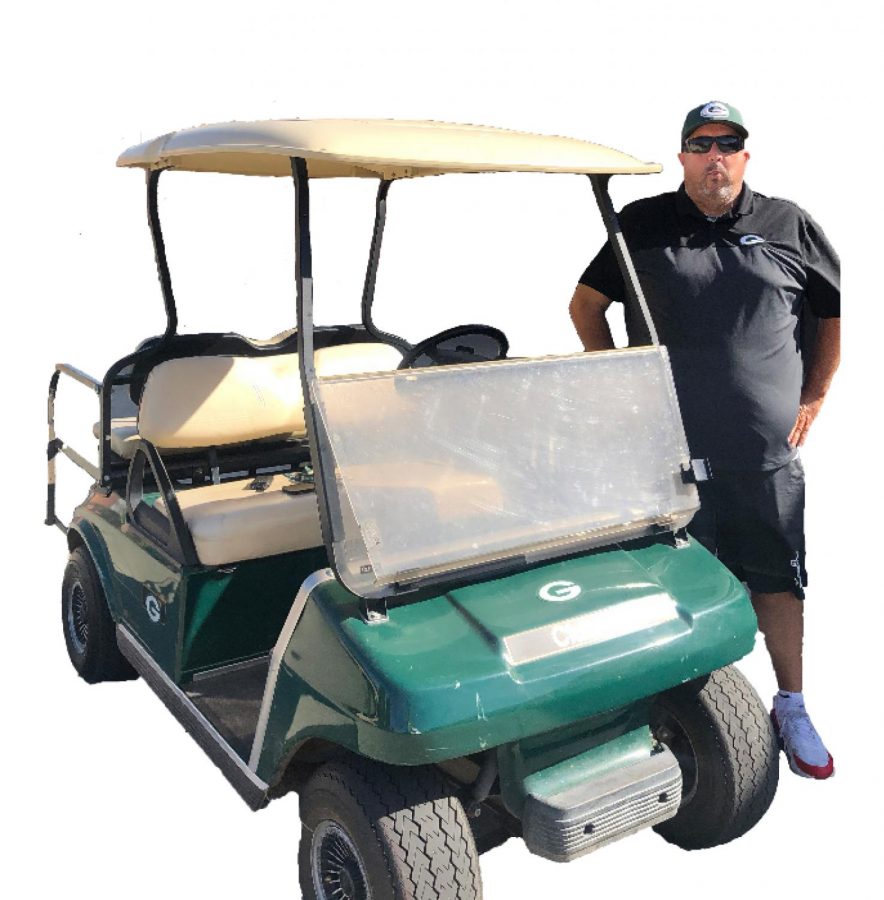 Jason Ott – “The dude on the golf cart” is what senior Derek Wong knows him as – has an essential role on the Granite Bay High campus in ensuring the school’s safety.

His specific job title is campus monitor, but he has a long list of duties.

Ott makes sure all all the gates in our school are locked while school is in session, and when it’s time to leave he unlocks them all. He also ensures the safety of the students of GBHS and delivers passes to GBHS students.

And, he monitors – he keeps a close eye on what’s happening on campus.

To many GBHS students, like Wong, he’s simply ‘The guy on the golf cart’ who busts all the students for doing bad things. But Ott said it’s actually quite the opposite – “the students that know me, know I’m here to help them out and keep everyone safe,” Ott said.

There are students who are critics – they don’t know what he does, or how he helps students. But they haven’t really given him a chance by meeting him.

The perception that most students have of him doesn’t affect his work. He has “nothing to gain from busting kids,” he said. He just has to do his job even if that means getting students in trouble – because his focus is on the overall safety of all students.

“If a student actually wants to get to know me then they would know I’m here for them and not just to bust them,” Ott said. “I want to help as many kids as I can, not just get them in trouble.”

Ott, not unlike many teachers and other staff members on campus, gets a bad rap from students because part of his job is to enforce the rules and regulations the school has to keep the student and staff safe.

Ott just wants to do his job to the best of his abilities. A majority of the time, he is wrongly stereotyped being mean and rude to students because of his job – when in reality his job makes him have to “bust kids” even if he doesn’t want to.

“The students’ opinion of me doesn’t affect my work, but if they got to know me, then they’d probably find out I’m a nice guy,” Ott said.

Unfortunately, most students do not try to get to know Ott, which adds to the misperceptions about who he is and what he does.

For students who do know Ott, they understand that he is simply “keeping the school safe and wants the best for each and every kid,” he said.

Derek Wong, Senior, said “I barely know Jason at all, I see him riding the golf cart around and that’s about it. I’ve never had a conversation with him.”

On the other hand Ean Mayhew, Senior, said “I don’t personally know Jason or know anything about him, I’ve heard some goof things about him.” Further showing how if student knew Ott better he wouldn’t be streotyped as a bad or mean guy.

Ott also has two children of his own on campus, so his focus on safety makes a lot of sense because he would want not only his own children to be well protected, but by doing that, everyone is protected as if they’re Ott’s children.

Which means Ott is, in some ways, every GBHS student’s second father.

So the next time you’re walking around on campus and you see Ott,  maybe get to know him as a cool dude on campus who cares about the students and not just “the dude on the golf cart.”