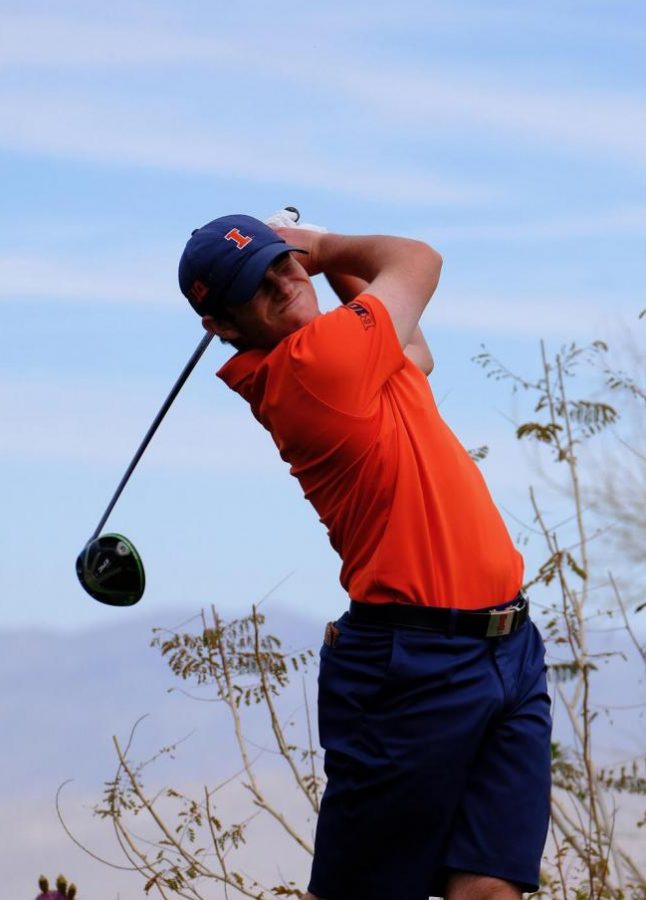 Winning a tournament is one thing. Winning a Division One collegiate golf tournament by three shots is another.

The tournament, hosted by Kansas State, consisted of 12 different teams, 65 players and three rounds. Baumgarten went 70-68-67 to shoot 11 under par and win the overall title.

“It was a fun to finally play solid golf,” Baumgarten said. “I didn’t play my best, but I played good enough and gave myself enough opportunities to put myself in a position to win.”

Not only did Baumgarten win, but so did his team by 10 shots, for a total score of 40 under par.

“As a team we went out and had a good vibe,” Baumgarten said. “We put our foot down and played solid.”

This positivity influenced how Baumgarten himself played.

“When you are playing for your team and not yourself, it’s easier to go out and put up a good score,” Baumgarten said.

Baumgarten’s success at Illinois can be traced back, in part, to the atmosphere he was in at GBHS.

“Granite Bay was a huge stepping stone for me,” Baumgarten said. “Granite Bay golf breeds a competitive and winning culture which is similar to Illinois.”

“I think arguably one of the bigger wins in our school’s history would be him placing first in what is probably the most prestigious high school tournament in the U.S.,” GBHS golf coach and athletic director Tim Healy said, referring to the Champion’s tournament. “The year he won, there were about 280 kids, and they were all upper-level players.”

His golfing career, though, hasn’t come without some setbacks. In his freshman year of  high school, he faced some adversity that actually propelled him forward.

“I didn’t make varsity my freshman year at Granite Bay, and that motivated me to do all that I could to make varsity the next year,” Baumgarten said.

His freshman year at Illinois, Baumgarten faced a similar challenge, and he reacted the same way.

“Last year at Illinois, I had my share of adversity, and I didn’t make the travel squad,” Baumgarten said. “I used it as motivation and things are looking up – I’m excited to see what the future has.”

His perseverance is undeniable, as noted by Healy.

“He’s the one guy who would never see something as a setback, it would just be the next piece of the puzzle … the next obstacle to overcome,” Healy said.

His rare combination of qualities set Baumgarten apart from most other athletes.

“Bryan has that combination of grit, talent, creativity and a will to compete,” Healy said.

Baumgarten hopes to play professionally after college and possibly even join one of his teammates from Belgium to play golf in Europe.

Healy believes Baumgarten has the skill set to fulfill his professional goal.

“As good of players we’ve had in this school’s history, and there have been some phenomenal ones,” Healy said, “he’s arguably the best player our school has had.”