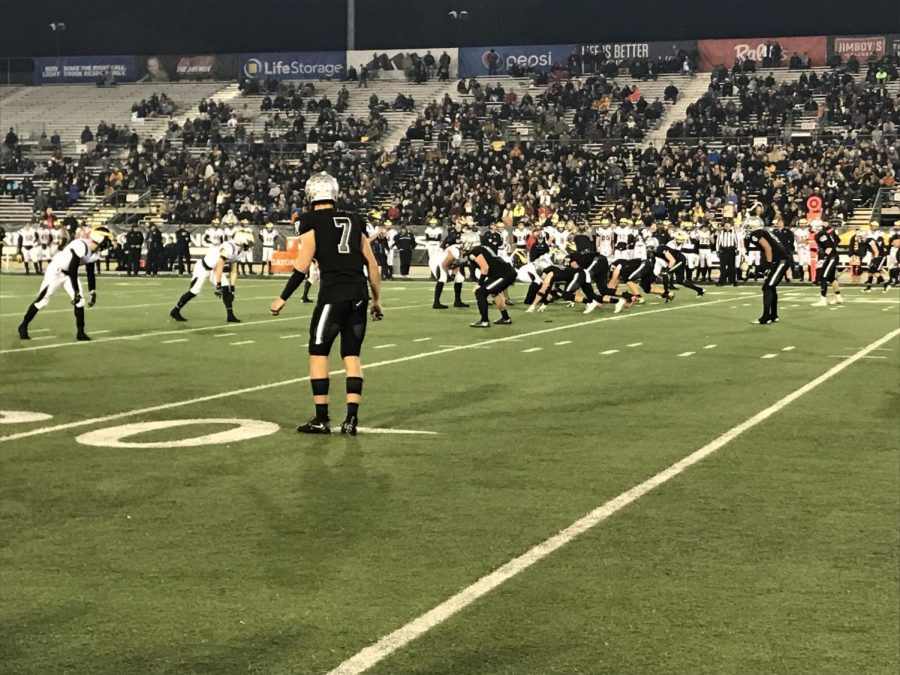 It seems as if the idea of home field advantage is irrelevant when it comes to Grizzly football, especially when the Grizzlies play a top local rival.

The game marked the second time the two teams had met. Granite Bay beat the Golden Eagles 28-21 in an SFL game in late September. But an unexpected yet strong playoff run from Del Oro caused tensions to rise in anticipation of the section game.

“This was a really big win for the team,” Triston Haverty said. “It was great to come out and beat DO for the second time this season.”

Both teams came out fighting, so the first quarter was eventful in that the two teams were at a stalemate as they both successfully shut down the drives of the other. Matt Barron made several runs to gain yards and inch toward the end zone, but the Grizzlies could only get one field goal from Brennan Holt giving Granite Bay a 3-0 lead.

The second quarter was far more interesting with mistakes and big plays. With 7 minutes left in the second quarter, quarterback Jade Foddrill threw an interception as the Grizzlies were within field goal range. Although spirits were down for Granite Bay at that moment, the feeling didn’t last long as Jaylen Latson made an interception of a risky pass from Del Oro quarterback Carson Jarratt.

“The team is doing really well right now,” Cole Diemer said. “Our offense is doing everything they need to, but I think it’s the defense which is really holding us together right now.”

The Grizzlies entered the third quarter with a shaky 6-0 lead. Brennan Holt kicked his third field goal to give Granite Bay a 9-0 lead early in the quarter. Big gains were then made by second-string players to put Granite Bay on the 1-yard line. The Grizzlies got their first touchdown of the night and a 15-0 lead when Foddrill ran a read-option to the right side and skirted into the end zone.

“The secondary was a big factor in the game tonight,” said junior Jace Foddrill, Jade’s brother.

The spirits of the Golden Eagles had been all but crushed going into the fourth quarter. They were unable to respond the pressure and ended the game without scoring. Evan Tattersall secured the final margin of victory for the Grizzlies with a rushing touchdown two minutes before the end of the game.

With the victory, Granite Bay advanced to the Div. 1AA NorCal championship at 6 p.m. Saturday at home against Pittsburg of Contra Costa County. The Pirates, who are 8-2 overall, lost 24-7 to state powerhouse DeLaSalle on Saturday but still advanced to the NorCal playoff game because of a quirk in the state playoff system allowing some teams in the open division to lose a section championship and still move on.

The winner of Saturday’s NorCal game will advance to the state championship, scheduled for 4 p.m. Saturday, Dec. 16, at Sacramento State.