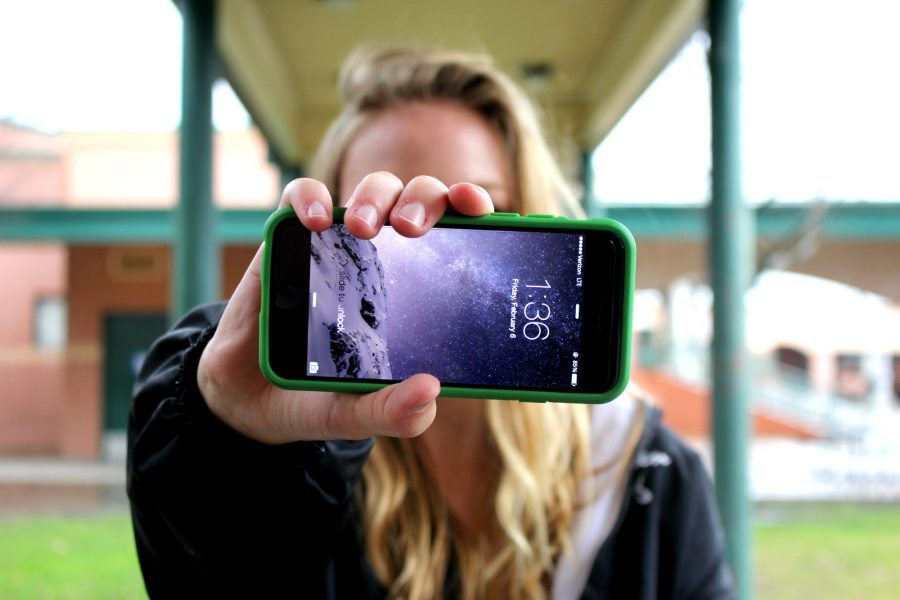 According to Merriam-Webster dictionary an addiction is a “compulsive physiological need for and use of a habit-forming substance.”

Granite Bay High School junior Heaven Quintana agrees that it is easy to become addicted to cellular devices when messages, alerts and updates are constantly pinging in.

“I would say I am addicted to my phone because I use it for everything,” Quintana said. “It would be hard for me to go more than a couple hours without my phone.”

It’s hard to imagine life without them because most people really do use them for practically everything. People use phones for calling, texting, social media, taking photos, web searches, gaming, emailing and even studying.

The no cell phone rules on school campuses have been altered, as using phones during break periods and for academic uses during class hours are allowed.

Many teachers on campus allow students to use their phones during school as long as it is related to what they are doing in class. However, having so many other things at our fingertips, some are tempted to abuse the privilege by texting or going on social media.
As phones are a source of communication, the people are very tempted to read what other’s say and quickly reply, so the cycle is inevitably going to occur.
It’s proven that this cycle of communication potentially inhibits learning at school. Students on campus have witnessed the consequences of cell phone use in class.

“It is a distraction to people who decide to play games while a teacher is instructing and then wonder what they were supposed to have just learned,” Quintana said.

Not only do students risk missing something important, they also might lose the privilege to use their phone if the teacher takes it away.

“Sometimes teachers take it away and I think them making a big deal out of it makes it worse than just telling them to put it away,” GBHS junior Jack Kennedy said.

Often times, parents as well as teachers take phones away as a punishment too. However, because, it is such a valuable resource when it comes to schoolwork, taking it away becomes an impractical punishment.

The convenience of  a phone is a major reason people are so attached to them.

“I like using it to see what my friends are doing and be able to easily communicate with them,”  GBHS junior, Amanda Tarbell said.

Since cell phones have become so advanced, people, especially teenagers, can rely on it to cheer them up, cure their boredom and provide them with answers to practically everything that can be web searched.

“Any risk of being disconnected is incredibly uncomfortable for us,” Advanced Placement psychology teacher Natalie Elkin said.

Some people nowadays can’t even read analogue clocks because they rely on the built-in digital clocks on their phones.

“In order to feel like we’re connected, we need to look at (our phones) all the time,” Elkin said. “It’s become an appendage.”