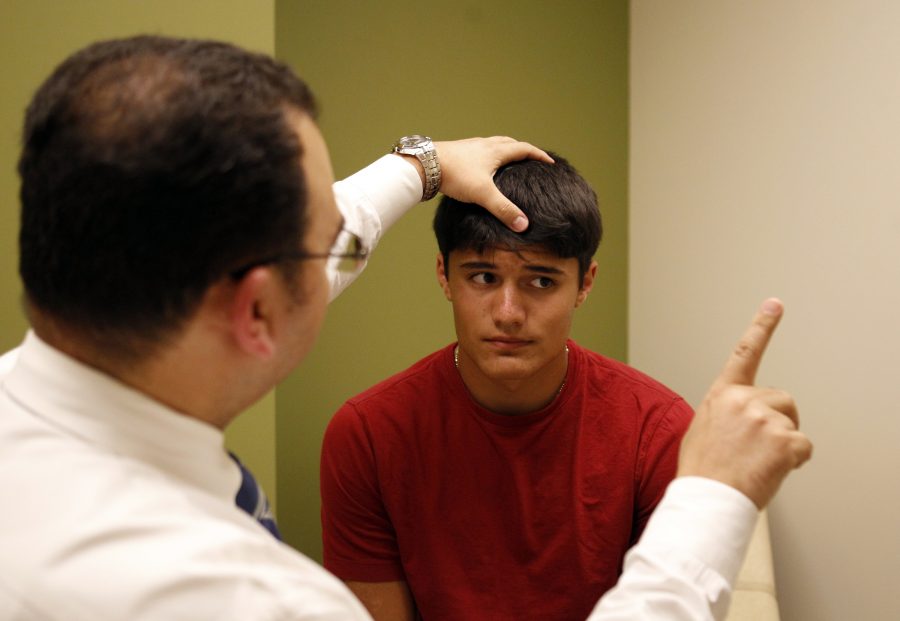 There are a lot of questions surrounding concussions as they become more prevalent in sports today.

Many athletes and parents are unsure of the severity of the injury and the short and long term effects they can cause.

Junior Gemma Rizzuto, who has been on the girls’ varsity soccer team for the past two years, has gotten three concussions with her most recent being about four months ago.

She has visited a neurologist, sports medicine doctor, physical therapist that specializes in concussions and another doctor who tests concussions.

When Rizzuto got her first concussion, she continued playing soccer for a few weeks without realizing the extent of her injury. She only learned of this first concussion during a scrimmage when she walked off the field and sat down without her knowledge.

According to the Centers of Disease Control and Prevention, 47% of athletes do not report feeling symptoms after a concussive blow.

“A couple of them when I first got (the third concussion) told me I would never play soccer again and another two said that I could play soccer but if I get another concussion within six months then I could be brain dead,” Rizzuto said.

As of right now, she has some brain damage to her right eye and balance so her physical therapist is working on those areas to help her recover. She also believes the brain damage has caused substantial obstacles academically.

“My doctors wanted me to have academic accommodations,” said Rizzuto, with her physical therapist recommending listening to the teaching in class, but not taking notes or over-stimulating herself in order for her brain to heal faster.

Her physical therapist cleared her two weeks ago, and now she can go back to playing.

According to Rizzuto, her concussions have played a huge role in the way she can learn material and process it.

“Its really hard, especially in the beginning to remember things,” said Rizzuto. “I learn lessons at school and go home and can’t remember what I learned earlier in the day, so I have to reteach it to myself.”

To truly retain and learn the material, she has to change how much and the way she studies.

At home, she also needs to include “brain breaks,” where every fifteen minutes she sits and processes the information covered.

“After my first (concussion) I remember trying to memorize and remember things and it was hard but it didn’t last as long as it has now,” Rizzuto said. “I’m still having trouble remembering things and it’s been almost three months whereas previously (memory problems) lasted probably two weeks.”

Aside from the academic aspects, she has also experienced emotional effects from the damage to her brain.

“My irritability right now is the same as a newborn baby,” Rizzuto said. “Randomly I’ll start crying or get really angry and I don’t know why.”

When he was about 11 years old playing lacrosse, Sabin got cross checked in the face causing his head to hit the ground and he blacked out.

His next concussion happened during his freshmen year in high school, Sabin again was cross checked to the face, except this time he retained consciousness. Directly after this second concussion he felt dizzy and nauseous.

After this second concussion, he thought the injury was minor and that the effects would wear off.

However, Sabin now believes that the concussions progressively intensified after each one he suffered.

“It really messes up your brain in that you start having to relearn how it works,” Sabin said. “Based on statistics, after I got my  concussion freshmen year, my grades dropped. Watching that was kinda scary in that I knew I couldn’t really recover because my mind wasn’t working well. So I had to work (to improve my grades).”

After his first and second concussions, he was advised by doctors to stay away from school for the first couple days following his concussions.

Similar to Rizzuto, Sabin’s doctors were worried about over-stimulating his brain following the hits.

While junior basketball player Dylan Cole has only been diagnosed with one concussion, which occurred one month ago, his symptoms were immediately apparent.

During basketball practice Cole attempted a rebound and a teammate’s nose hit his temple.

When it happened Cole said he felt like there were “explosions going off” in his head, but even then he couldn’t tell the seriousness of the injury until his teammates told him he needed to sit down during practice because he wasn’t looking well.

“(The symptoms) were pretty bad for 5-6 days, now I just get a headache every now and then,” Cole said.

It is important to undergo the proper procedures advised by your doctor and take the time off they recommend to prevent further injury and have an effective recovery.

Granite Bay High School’s nurse Jenny Serrano said that athletes don’t need to worry as much about long-term effects after just one concussion, but three or four concussions can certainly cause problems.

If you have some of the main symptoms of having a “headache, disruption of sleep patterns, memory loss, or balance issues” then Serrano recommends you see a doctor.

Even if the doctor just wants to monitor symptoms, like she said is usually the case,  there is no reason to mess with an injury to the head.

“If they know that they get injured during a practice or a game they need to tell someone right away, and not try to play through it.” Serrano said. “What I hope that students get is if they tell someone right away and it gets checked out and evaluated and they get treated or rest they can usually return to play pretty quickly whereas if they wait and symptoms get worse then it usually is a longer time being out.”

“Unfortunately with student lots of times they might get injured especially during practice and not tell anyone until later that evening or the next day.” Serrano said.“It’s really important that kids tell coaches or parents right away when something happens so they can go get checked out by a doctor.”