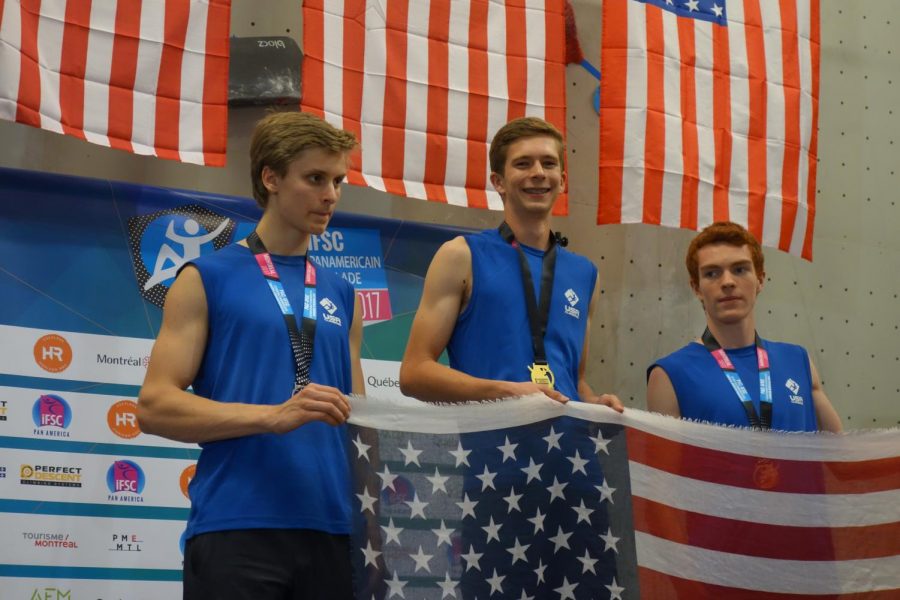 “It was surreal,” sophomore Colin Wills said as he stood atop the podium bolstering him the Youth Continental Champion of the Americas.

Baby gates were no obstacle for Wills as he’s been climbing since before he could walk. It only made sense for him to be an international rock climbing champion.

Yet Wills has humble beginnings, he didn’t start rock climbing until just four years ago.

“I went to Granite Arch for some birthday parties, and every time I stepped into the gym I loved it,” Wills said. “Climbing is definitely my passion.”

Wills’ first goal was to learn more about the sport he was so attracted to. Competitive rock climbing is broken up into three categories – speed, sport and boulder climbing.

“Sometimes I will be hanging on to a hold that is the size of half a deck of cards,” Wills said, “and your foothold might be the size of a dime glued to a wall.”

To make an even match for the almost indomitable walls, Wills spends four days a week at the gym training for three hours at a time at each session.

“We use the hangboard often – which is a board that has different types of small hand holes, and we will hang on them for long intervals for 30 minutes at a time,” Wills said.

“Climbing uses nearly every muscle group in your body,” Wills said. He works on mental conditioning as well because “if you lose focus you can slip and fall in an instant.”

Wills trains outdoors too on spectacular rock walls and boulders. “I think I would get burnt out of competitive climbing if I didn’t have outdoor climbing to balance it,” Wills said.

Wills loves spending 12 hours a week in the gym training, but he doesn’t just do it for fun – he does it to compete.

“I’ve been in (upwards of) 30 competitions since then,” Wills said.

He started off doing local competitions then “after I started training harder I made it to regional competitions (which consists of northern California and Nevada) and did well there, and made it to divisionals,” Wills said. He progressed and excelled at every level he found himself at and was invited to Nationals soon enough.

“My coach told me that I would make Nationals far before I ever dreamed of doing it, it was amazing to actually see it happen,” Wills said.

After impressing at Nationals, Wills was invited to climb for Team USA in his first international competition in Austria this last August.

Out of 130 climbers in his division, Wills placed in the middle of the pack. “I didn’t do quite as well as I wanted to,” Wills said, partly because he was “just coming off sport season” and wasn’t prepared for the differentiating boulder style of climbing.

After two months, Wills had trained in his usual boulder format and was ready for his next big challenge – the Pan American Championship in Montreal, Canada.

“Nine countries from North and South America were present and over 30 climbers were in his division,” Wills said.

Wills won the gold medal and earned his prestigious title of “continental champion.”

Wills reached the top of his game in his division and is already looking at his next goal – world competition, and possibly even the Olympics.

“Rock climbing will be introduced (into the Olympics) for the first time in 2020,” Wills said, “it’s definitely a goal of mine.”

At Wills’ current rate of progression, nobody doubts his ability to be of the first Olympic rock climbers. Wills not only has the skillset, but also the mentality of a future Olympian.