GBHS goes into lockdown after threat 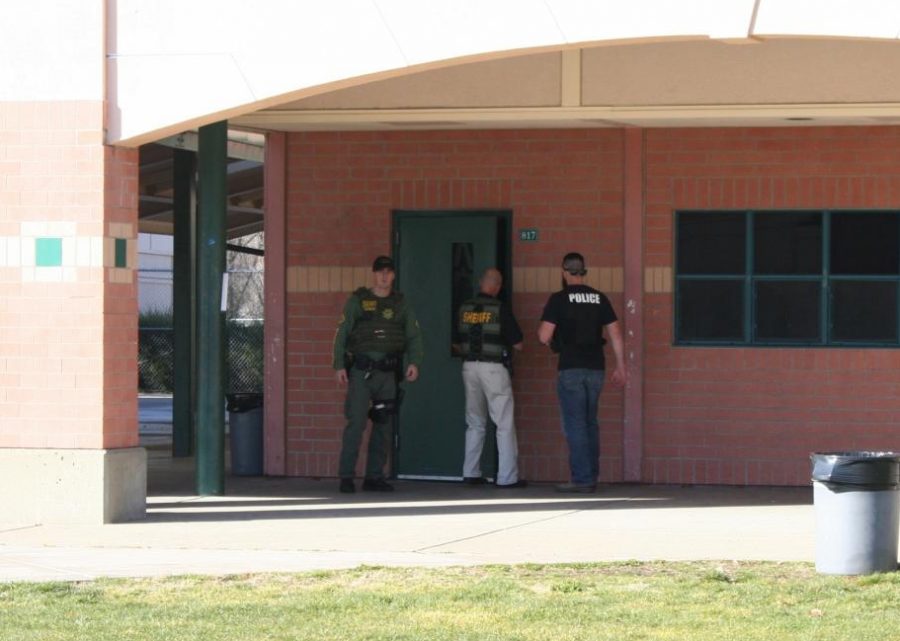 After two weeks of schools across the country tightening up their safety policies and students experiencing angst after the Parkland, Florida, shooting, Granite Bay High School faced the daunting reality of a possible imminent threat on Tuesday afternoon.

On Feb. 27, at approximately 2 p.m., GBHS was placed on lockdown after a threat was brought to the administration’s attention.

According to Roseville Joint Union High School District superintendent Ron Severson, a handwritten note in which the author threatened to shoot up GBHS was found by a student in a restroom earlier today and was eventually brought to an assistant principal’s attention. Within minutes, the school went on lockdown.

“There was a note – and ” Severson said. “We couldn’t determine that the note was a hoax in time before the end of school.”

Principal Jennifer Leighton said the note was brought to the administration’s attention around 1:50 p.m. today.

“I was doing my best to communicate with teachers and with general emails out to parents and also getting updates from officers and my assistant principals as they went along,” Leighton said.

The GBHS school resource officer, Placer County Sheriff’s deputy Greg Hopping, was at the district office for a safety meeting when the lockdown started, so an officer from Olympus Junior High in Roseville was called over to help deal with the situation.

After Leighton spoke to district officials, who told her to go into lockdown immediately, more law enforcement officers were called to campus.

The suspect who wrote the note has not been identified.

“Since the note was found in the boys’ bathroom, every boy who was out of class at any time during third and/or fourth period today is a suspect and will be investigated – teachers have already sent us names,” Leighton said.

Leighton said the possible punishment for the suspect includes expulsion.

What made the afternoon’s lockdown perhaps even more stressful for students and faculty was the fact that earlier today, just as the intervention period was about to begin, GBHS officials executed a random practice lockdown drill for the purpose of preparing students and faculty for an actual school shooting or other serious incident.

“It was an emotional roller coaster, I guess,” senior LJ Matias said of the lockdown drill followed by the real thing. “I thought it was (another) drill at first, and then I realized it was actually real. I just knew that there was stuff that could go wrong.”

When the actual lockdown occurred, many students – like Matias – merely assumed it was another drill or an accidental bell alert.

“I was on my way to the bathroom and the alarm went off, so I ran to the nearest classroom which happened to be journalism,” senior Zach Wong said.

Wong was one of many students who was out of class during the beginning of the lockdown and had to hustle to get into the nearest classroom.

Not only were the students on campus experiencing some stress and panic, but students who have fourth period off or were absent from school were left wondering if their fellow students were safe on campus.

“I was taking a nap and I got an email (about the lockdown), and at first thought it was a mistake, but then I read on about how it wasn’t a drill,” said senior Allyse Zimmerman, who has fourth period off. “Then I just felt very uneasy and nervous for my friends back at school.”

Law enforcement was quickly called to the scene, and eventually Placer County Sheriff’s deputies and Roseville police officers – some in uniform and others in plain clothes – began to release students on a class-by-class basis, briefly checking each student’s backpack and directing them to the front gate of the school.

Yvette Richmond, a worried mother of two GBHS students, witnessed how the police were blocking people from entering the school as she drove by the scene.

The last group of students were released around 5 p.m., more than two hours after students were supposed to be dismissed from school.

In a school district press release that was circulated Tuesday afternoon,  officials reported that “school administrators will continue their investigation in an effort to identify the person or persons responsible for the threatening note.”

Although this situation didn’t lead to a more serious incident, Severson said it’s a reminder that the main focus of school officials is the protection of students.