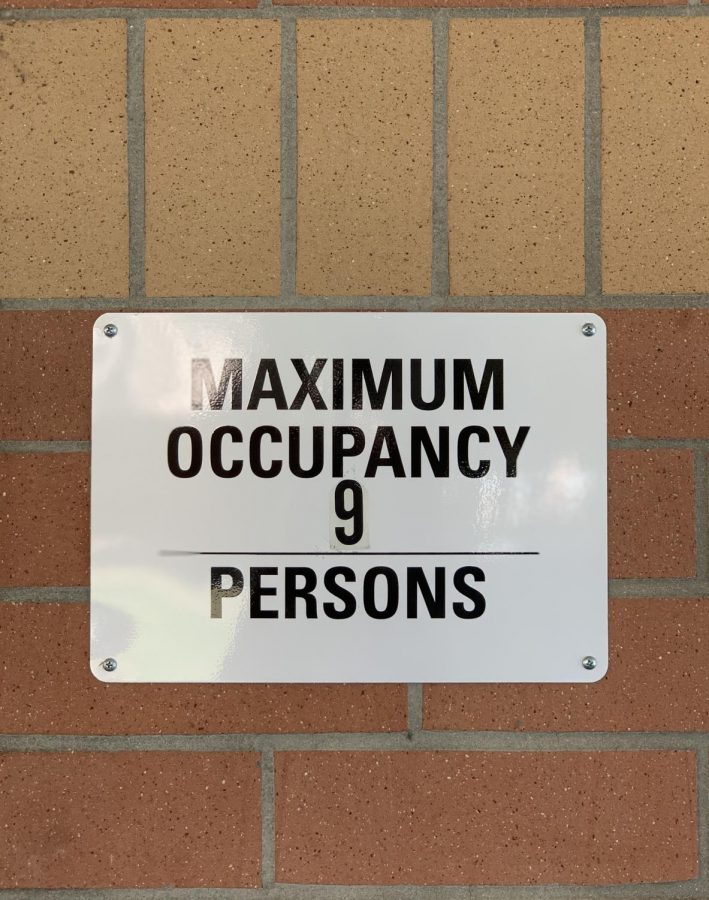 Maximum occupancy signs are affixed next to every bathroom on campus with multiple stalls.

The youth of America are certainly no strangers to what can be considered a current and highly concerning epidemic in society – vaping.

Because of captivating flavors as well as the ease of having a small electronic device to vape from, the number of American teens who vape has increased exponentially over the last three years.

Campuses across the United States, Granite Bay High included, have recently put a focus on preventing the numbers in teens who vape from increasing by implementing new policies and regulations.

The issue has received national attention from the Trump administration in the White House following the news of multiple deaths and the now-evident health risks of vaping.

In September the Trump Administration announced a plan to remove all flavored e-cigarettes  across all retail channels as part of the new guidance document.

Big name e-cigarette companies such as Juul have taken measures such as pulling certain flavors and suspending their social media accounts in order to avoid influencing youth.

San Francisco, home to Juul Labs, in June imposed a ban on the sale of all e-cigarette products.

As measures kick in on the state and national level, GBHS officials have also been working on new ideas to prevent the epidemic from spreading.

Students might have noticed that this school year, all bathroom doors have remained completely open throughout the entire school day – the open-door policy was implemented by the administration as a way to reduce vaping in bathrooms.

“We talked about it as a piece first,” assistant principal Jessup McGregor said. “We had a site team meeting with all of our management, which is like leadership people on campus, and everybody thought it was a good idea to at least try.”

Vaping in school bathroom stalls has become a common sight on campus as the number of students who vape has dramatically increased.

“Kids are coming in as freshmen having experience and maybe even nicotine addictions already, and now they have to go through a six-hour school day feeling withdrawal of nicotine in the brain,” assistant principal Greg Sloan said.

Students who do not vape also experienced frustration with those who do vape in campus bathrooms and made decisions to report what they observed to administration.

“Especially from boys, we got a lot of complaints that there’s a lot of vaping in all the bathrooms, that it’s hard to get in and use the bathroom without being (exposed) to people using it,” McGregor said.

Having open bathroom doors is actually a common policy that has been established on many campuses.

“Every other school in our district has already had their doors open, and we were talking with other schools and we just kind of realized, wait a minute, we’re the one school who has doors closed,” Sloan said.

Although the policy has only been practiced for a few months now, it has proven to be an efficient way for school monitors to check in on the bathrooms.

“It does make it easier for us and our monitors to just pop in the bathrooms really quick without it being a scene,” McGregor said. “It’s a pretty common policy, I’m hoping it’s positive, anything we can do to help would be better.”

Many times, the decision to vape at school by some students can simply bother those who do not.

“I just think that there’s a time and place to vape and that the school bathroom is not the place to vape,” senior Shaina Dura said.

Administrators also want to prevent the negative and pressuring influence those who vape can impose on non-vapers.

“If someone does it outside of school, we can’t control their lives,” Sloan said. “But we want to keep this a safe place so that students aren’t exposed to things that they don’t want to do, or start getting life-long addictions because they just walked into a bathroom with the wrong crowd.”