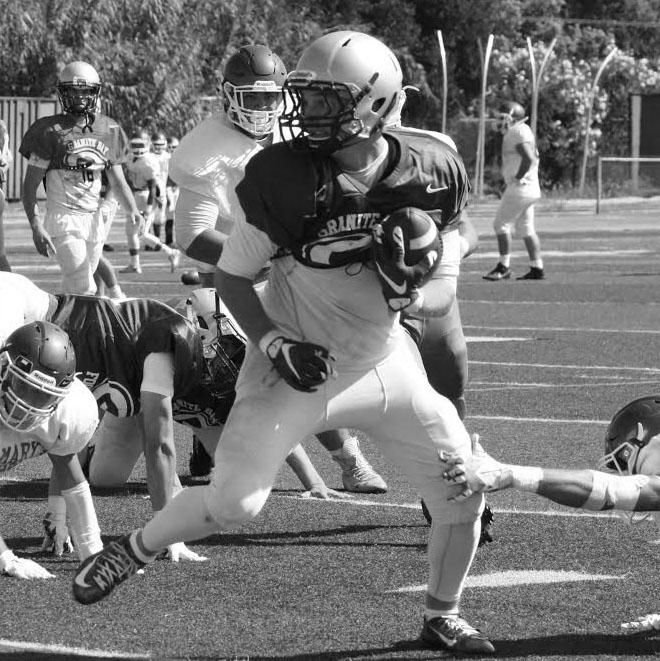 One year ago, three-sport athlete Scott Henrichs could have never predicted the nightmare that was to come.

“He would come home from baseball practice and just sleep,” said his mother, Laura Stannard. “We couldn’t move him off the couch and he wouldn’t get up until the next morning to go to school.”

After several visits to the doctor, the only diagnosis they could muster was pneumonia and sinus infections. Yet, after lots of antibiotics and attempted treatment, nothing would work. Instead, Henrichs continued to feel worse.

It wasn’t until the end of April after a chest X-ray that they got an answer.

“The doctor called me while I was teaching and said I need to go home, get Scotty, and we were going to be admitted to the sixth-floor cancer ward of Sutter Memorial Hospital, as he has lymphoma.” said Stannard.

Fortunately, after substantial testing, it turned out Henrichs was cancer free, but medical personnel still held him for about a week before they were sure.

“I was in the cancer ward and I was there for four or five days because they thought I had cancer,” Henrichs said. “That was terrible because I was with all the little kids, that was the worst part.”

So after multiple tests and procedures, and still unsure what Henrichs had contracted, doctors decided it might be an infectious disease. He was then moved to a quarantine room and tested more until they came to a consensus that it was not infectious.

Henrichs was then sent home and yet again, he progressively got worse until he was readmitted. This time, he had to undergo major surgery.

“They had to go in through his back, tear apart the muscles in his back, rip open his rib cage and retrieve two 1- inch pieces of his lung,” Stannard said. “Most lungs are pink – his were mustard in color.”

After seven total operations and two major surgeries, doctors finally had an idea of what plagued Henrichs.

Lupus and IGG-4 are lung disease auto-immune disorders, meaning Henrichs’ immune system mistakes its own tissue as foreign and tries to fight it off, which can lead to damaged organs or even organ failure.

Henrichs’ struggle affected the entire community as it was very apparent he was fighting for his life.

“He looked awful and felt worse,” said Granite Bay High School varsity football coach Jeff Evans. “It was tough to see him in that condition because we are used to seeing him as such a vibrant and elite athlete, one of the few three-sport athletes we have at Granite Bay.”

“We left the hospital the day before school got out and he was 152 pounds,” Stannard said. “He looked like a skeleton. He had lost 40 pounds in this five-month nightmare.”

Many of Henrichs’ classmates, teammates, coaches and, of course, members of his family were all praying for his health.

“I truly believe Scotty was able to get better because he knew how many people were pulling for him,” Stannard said. “Words can not express how grateful and appreciative we all are for our friends and family.”

His family kept the community updated through emails that were forwarded to a wide number of supporters.

“Scotty’s family and his own attitude made a lot of us around him that were struggling to deal (with his illness), a lot more able to do so,” Evans said.

Henrichs’ struggles were especially difficult for his family.

“I got through it because of, and with, my husband,” Stannard said. “He was just as scared watching his (step-son) go through this, but he was our rock,”

“When somebody possesses that sort of heart and courage, you cannot replace that,” Evans said. “Scotty is everything we want our football players to be.”

The community showed incredible support to their family, sending cards, baked goods and otherwise helping the family move forward in a difficult time.

Fortunately, Henrichs has been able to battle this disease and has recovered enough to play sports – he’s on the football team this fall – and be an active participant in his senior year of high school.

“Scotty is the strongest young man that I know,” said Evans.

Henrichs’ outlook on life is one that can only be understood by someone who went through a life-threatening experience.

“I’ve definitely changed,” Henrichs said. “Before, when you go to practice and it’s 115 degrees, everyone hates that and nobody wants to be there. But after (being sick), you appreciate going, it doesn’t matter if it’s 130 degrees or you have to be there for five hours, you just look forward to being there every day and being with your friends. It doesn’t matter if you win or lose.”

His struggle has affected his friends and classmates as well.

“His experience has helped me deal with my season-ending injury, because even though I’m missing my senior year, I’m blessed to not have had to endure the adverse circumstance he was thrown into,” said senior football player Reed Homen, who tore his meniscus in August. “It puts everything into perspective.”

Evans and others are thrilled that Henrichs is back in the Grizzly fold.

Henrichs is a starting receiver and the starting kicker for the football team and continues to prove himself every day. He is a leader of the team and according to Evans and others, he represents the heart and value of what it means to be a member of the Grizzly football program, and a GBHS student.

Henrichs has returned nearly to full health, but will have to monitor this disorder, possibly for the rest of his life. Still, the fact that he’s back on the field at all – and looking forward to playing basketball this winter and baseball in the spring – has been wonderful news to his family, friends, teammates and the entire community.

“It is because of his age, attitude and perseverance that he has been able to recover so well and quickly,” Stannard said.