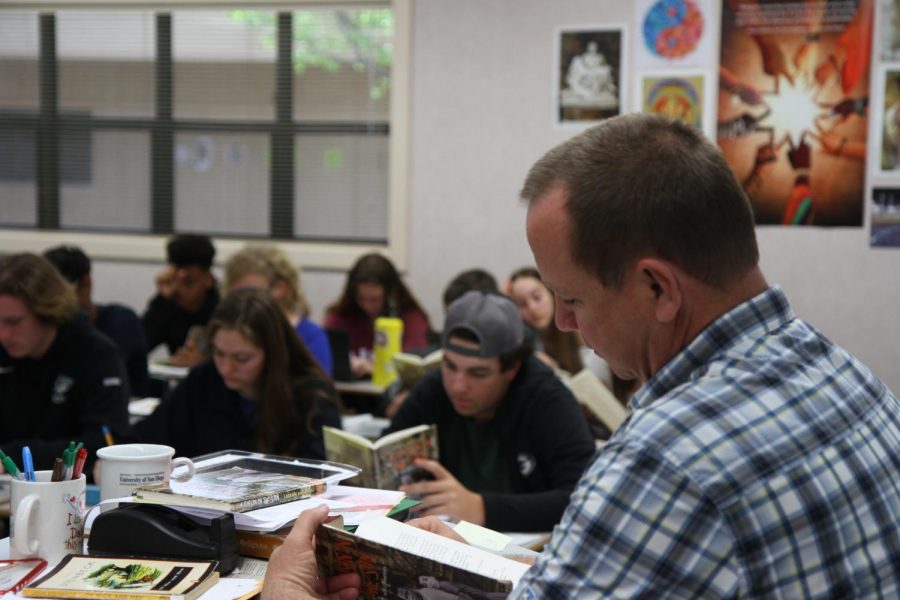 “I was an engineering major in college, so I had a lot of math and science background so, but then I went under elementary education which means I can teach multiple subjects, because I like more than just math,” Beidler said. “I kind of narrowed it down, I ended up enjoying math more when I taught multiple subjects so I kind of leaned in that direction, simplified my life.”

Instead of focusing on one teaching subject, Beidler wanted to branch out to others, so he could enjoy his main priority more. Beidler also states that he is always coaching and teaching.

Beidler explains what strategies he uses to make sure he has the time to coach while teaching.

“[I think] time management, but I also just think it’s part of our role as teachers if there’s sports available at the school to take on a roll that’s extracurricular, so I think more teachers need to take on extracurricular activities so kids see you outside of the classroom doing something different, or being more of a human being than just teacher.”

Some of Beidler’s students appreciate how much effort he puts in even though he is also coaching.

“I like that he’s energetic about teaching, and he’s always trying to help while also giving us freedom to work by ourselves. He openly shows that he trusts his students and that makes it a lot easier to have good relationship with your teacher. He’s easily one of the best math teachers I’ve ever had,” said freshmen Layla Olvera.

“I like that he will teach us the lesson and then let’s us work on those skills with peers to let us practice. Basically I like the fact that he gives us lot’s of time to review and practice our work,” said freshmen Emma Hodson.

Beidler also dedicates his time being the lineman coach for GBHS. He makes the time to spend time on and off the field, and his players appreciate his dedication.

“He is a respectable good guy and he always makes the best decisions for his players. He is very knowledgeable and is a great guy. His teaching did not interfere, he always had his priorities straight and was present to everything possible,” said senior Bryce Van Order.

“He was very passionate about football. I never had him as a teacher and can’t really think of any times his teaching interfered. He was both funny and serious at times, and he really cared for every player individually,” said senior Carson French.

David Tastor: Twice the work and the passion

David Tastor is an English and IB World Religions teacher as well as a JV soccer coach at Granite Bay High School.

The responsibility of having two jobs on campus comes with having to wake up early and stay up late.

“There is a lot of time invested. I have to get things ready, make sure the game plan is prepared, make sure all the equipment is taken care of and the fields are set up. By the time you get home, it’s 7:30-8 p.m. They end up being long days,” Tastor said.

Even with all the stress, he doesn’t let his two jobs interfere with each other and is very committed to both.

“Practices were an hour and a half after school and games were even longer, but he took time out of his day to coach us. He never let teaching interfere with soccer and vice versa, which made us become better players. It meant a lot,” freshman Brynn Sommer said.

The sport also inspires his lessons and the way he teaches his freshman class, English 9.

“He will show videos (of soccer games) in class to teach us about perseverance or observation. I liked when he did this because it was a nice break from the regular teaching and made the class a lot more fun,” freshman Ashley Ryder said.

Tastor said that at the end of the day it is all worth it, despite any challenges.

“I like teaching kids, I like to see kids learn and grow and I like to see the same thing on the field with players. With students and athletes, I get a wide variety of kids with different skill sets and its interesting to watch them develop as people, so that’s why I do what I do,” Tastor said.