How will Prop. 64 impact the Granite Bay community? 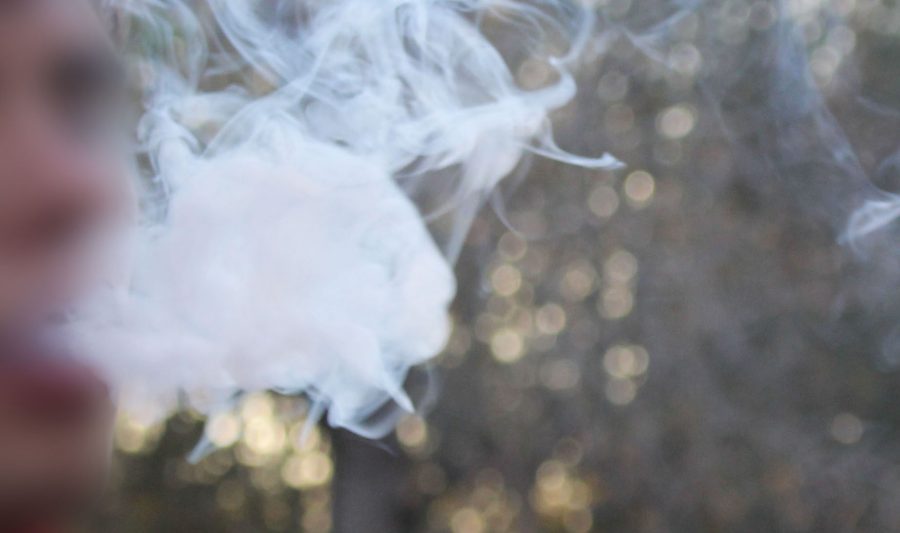 A GBHS student smokes marijuana off campus. Many teens smoke pot, despite it being illegal.

During a campaign in which candidates often resorted to character attacks and petty accusations, many turned to Michelle Obama’s dignified words – “When they go low, we go high” – as a beacon of hope. Californian voters, however, interpreted the speech in a different manner.

Proposition 64 was passed on Nov. 8, legalizing the recreational use of marijuana for those 21 years and older, and making California the fifth state to do so. Later on Election Day, Massachusetts and Nevada also approved similar initiatives. Although recreational pot shops will likely not crop up until Jan. 2018, adults may now smoke up to one ounce of marijuana, as long as it is not in an area that is “visible from a public place.”

While it is still illegal for a minor to smoke marijuana, opponents of Prop. 64 claimed that its approval would lead to more kids using pot, and now that the former is true, many wonder whether their claims will come to fruition.

Yet, Jake Lyons, a senior at Granite Bay High School, said that the new legislation will have little effect on teenagers’ smoking habits, as anyone who is against smoking will not change their mind because the law says that it is now legal.

“You’re either for it or against it,” as Lyons put it. “People are going to be either complete advocates for it, or say that it will give you schizophrenia.”

Kathie Sinor, a GBHS Health and Safety teacher, is unsure if more students will be trying weed in the near future. What she is more concerned with, however, is the increased potency of today’s marijuana.

“The THC content … is much, much higher today than it was in the 60s and 70s,” Sinor said. “You used to never hear stories of people overdosing on weed. But now with the THC being so high, (you do) … People just assume ‘Oh, it’s just weed,’ but it isn’t anymore. It’s much, much more powerful.”

Even before Prop. 64 had passed, marijuana was absurdly accessible for something that was against the law.

According to Tanvi Yadlapalli, a sophomore at GBHS, most students know where to get marijuana, and people choose to smoke regardless of the legality, thinking that it is not as harmful as other drugs. Lyons echoed this view.

“If you go (into a medical dispensary for) your first time, then you’re not going to get anything,” said an anonymous senior who regularly smokes marijuana. “But … if you go into (a dispensary) and you’ve been a loyal customer, they aren’t going to check your ID. … They don’t care.”

Though marijuana is available to many, it has not nearly reached the level of normalization that alcohol has achieved. Yet, some have said that legalizing the recreational use of it is the first step in reaching such a level.

“Now … we have a state that says ‘Hey, it’s okay to use marijuana. You just have to wait until you’re 21,’ but the bigger message is, it’s okay to use,’” said Jon Daily, the founder and director of Recovery Happens Counseling Service, which provides outpatient treatment for those struggling with drug abuse. “That’s a harmful message, and will show as more kids start using.”

“I can treat a heroin addict or a cocaine addict easier … than a marijuana addict or alcoholic,” Daily continued. “No one is going to freak out when someone is using alcohol or marijuana until it is way too late. It’s like (intervening at) stage IV cancer (rather than stage I), where you’re trying to reverse the symptoms instead of preventing them from progressing.”

According to the anonymous senior, most students have tried marijuana “at least once or twice” or are tolerant of it. This is perhaps due to the medicinal nature of marijuana, leading some to downplay the adverse effects of the drug.

Whatever the reason, most agree that proper education of marijuana and its effects is necessary, especially given the passing of Prop. 64.

While Sinor said that the health curriculum will not likely change, she did say that now, more than ever, it is important to emphasize the unit on drugs, and the potential consequences of substance abuse.

“I was disappointed (when I heard it passed), but I actually understand it,” Daily said. “People just don’t have the information of the harms of today’s marijuana.”