From Smarties to Parties: Observing the decline of trick-or-treating

As students grow older, trick-or-treating becomes a thing of the past, replaced by the appeal of parties. 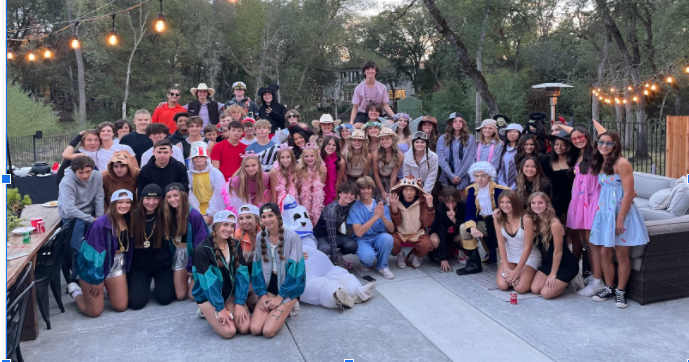 Members of the freshman class at a party on Halloween night. -- instead of the usual trick-or-treating

The beloved national pastime has been rapidly replaced by loud rave music and crowds of people. This is, of course, referring to trick-or-treating and how its once prominence in students is quickly being replaced by parties as those students make their way through high school.

Students at Granite Bay High School, along with high school students in general, are trending away from trick-or-treating and towards partying on Halloween as they move from freshman year toward senior year.

The results of a survey taken by students at GBHS show upperclassmen are trick treating significantly less compared to underclassmen.

Partying does not completely replace trick-or-treating but it seems the longer students are in high school, the more parties they experience and the more they favor this experience on a Halloween night.

“Once you reach a certain point, a lot of people…make the switch,” said senior Paige Beater.

Socially, the switch is also apparent.

There is a clear 50-50 split between feelings on age restrictions and trick or treating.

“I prefer hanging out now that I’m older, but..I’m not against trick-or treating,” said junior Lee Randolph. “Trick or treating is for all ages.” “”

It is also obvious that a friend’s opinion or preference is largely influential on a student’s choice of trick-or-treating or partying.

“I really don’t go to parties very often…I’d only go if my friends are going,” said junior Blake Chandler.

So while most high school students are turning to partying on Halloween as they grow older, there are many that still agree trick-or-treating has no age limit.