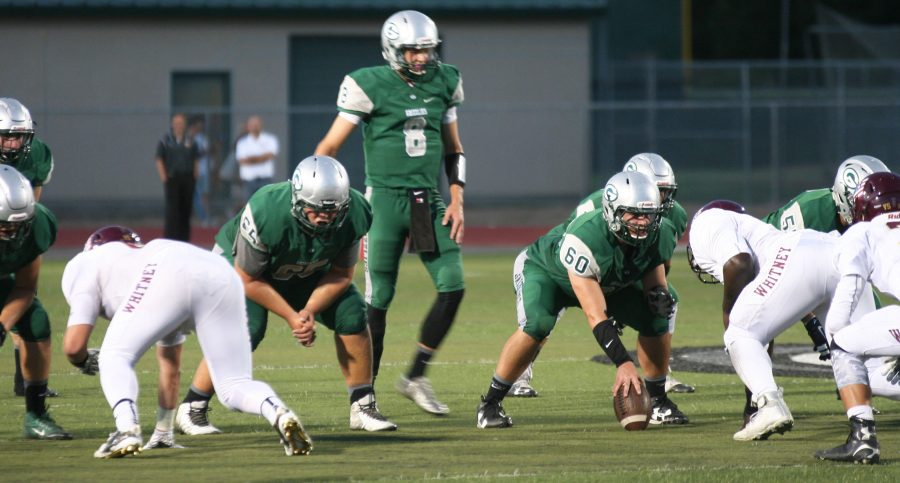 Granite Bay High School football holds a vast variety of traditions and culture critical to the all-around experience both fans and players receive throughout the course of a season.

From practices to senior trips, traditions and culture run deep in the roots of GBHS football.

Despite football being a large part of many player’s high school experience, various traditions allow for players to be just kids – in a competitive and fast paced high school.

Despite the countless hours of hard work, senior captain Jade Foddrill described his long summers revolving around football as nothing less than amusing.

“During the summer we do lots of bonding games together,” Foddrill said, “as busy as our summer is with football, we can all sit back together and be kids – it’s always nice to let loose.”

“We have some chants and cheers, my favorite is green machine. A type of chant we do after warm ups,” Ellis said.

One jersey in particular holds tremendous value in the football program at Granite Bay.

“The number 5 jersey is big here, it’s special. Cameron Smith popularized the jersey when he was here and it’s just been passed down to players who bring it on the field and have his mentality,” Foddrill said.

Despite the jersey’s reputation and importance, Ellis, a worthy candidate of the number 5 jersey wants to continue to wear number 4 for next season.

“My defensive line coach  always tells us to make a name for ourselves and I want to leave my own legacy in number 4,” Ellis said.

Apart from the value of jersey numbers, other traditions stay close to Foddrill’s heart.

Foddrill, a Catholic his whole life, appreciates the prayer said prior to games.

“We do a prayer before games, and say the Hail Mary. We’re all down on our knees in the locker room, others obviously don’t have to take part, but I choose to,” Foddrill said.

The student body at GBHS plays a significant role in the traditions revolving around the program.

“We’re very close with the band and the tribe, they have their routines planned for the games too. Tribe here is huge, having them in the endzone is such an unreal feeling, I can’t describe it,” Foddrill said.

GBHS football is always looking for and building new traditions to exemplify their exceptional culture and beliefs in grizzly pride, a moto brought about by Head Coach Jeff Evans.

Junior kicker Everett Hayes teamed up with senior kicker Brennan Holt this past season in efforts to raise money for cancer research.

“Apart from our relationships with the tribe, band, and our senior trip, I really hope to continue what we did last year with raising money for cancer research,” Hayes said.

“Last year, we helped raise money for childhood cancer research through an online program for kickers. We got members of the community to pledge donations and financial support based on how well we kicked throughout the season,” Hayes said.

With both Holt and Hayes’ exceptional performances and efforts to raise funds, the two ended up raising $2,500 for childhood cancer research.

Despite this last season being the first time GBHS football took part in a program like this, Hayes hopes to continue his efforts through his senior year and create a new tradition for childhood cancer research.

The various traditions surrounding GBHS football have aided in creating an extraordinary program in which players, coaches and fans all are awarded with an exceptional experience.

“The culture and tradition here with football is something you don’t want to leave. It’s so deep, something I grew up in and I wouldn’t want to experience that anywhere else,” Foddrill said.