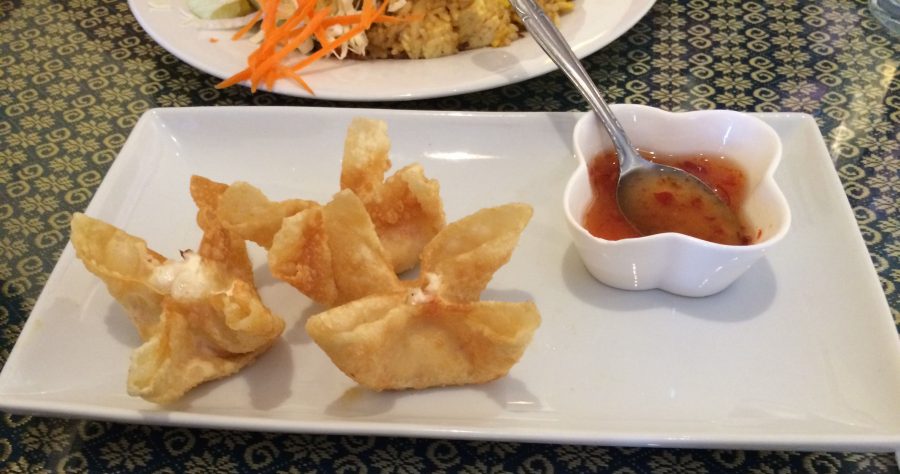 I was greeted by one lone server, standing in the corner.

“We have the best pad see ew in Granite Bay,” she said to me, handing me a menu. I briefly glanced over the options, unnerved by some of the prices. “Do you?” I asked in response, feigning incompetence. I knew their pad see ew was fantastic, as I had been to Khun Suda many a time, and ordered that specific dish.

Yet, this visit was different – this time, I was eating as a critic, not as a fan.

And so I ventured out of my comfort zone. I was lured into ordering the crab and cheese wontons by a friend, which did not disappoint. I typically avoid appetizers, and I’m not sure I’ll order the wontons in the future, but I will admit that they were a nice starter.

But before the wontons came, our adorable waitress served the complimentary soup, which was perfectly okay. It was bland, but because it was free, I can’t say that I expected any more from it.

The aforementioned friend also persuaded me into ordering the yellow curry, as opposed to my usual red curry. The yellow curry was sweeter than what my taste buds are accustomed to, but was still enjoyable.

Then the real star of the show arrived – the pineapple fried rice. Which was, again, sweeter than what I am accustomed to, but the sweetness worked in this dish’s favor. The pineapple and the raisins added flavors that were certainly distinct, but I’d be lying if I said I didn’t enjoy them.

I was concerned by how quickly the food came out, thinking that it was not fresh. These concerns vanished as soon as I took my first bite; it was obvious that the food was prepared with care.

Because we bought lunch portions, the pricing was reasonable; every dish was under $10. That being said, if you order a dish with seafood, or one that is seasonal, the price is no longer within the typical student’s budget.

Khun Suda is neither glamorous nor trendy, but it’s a place with story and tradition, and they sure know how to spice food. As far as I’m concerned, that makes it worth returning to.