Find My Friends phenomenon takes over the GBHS campus 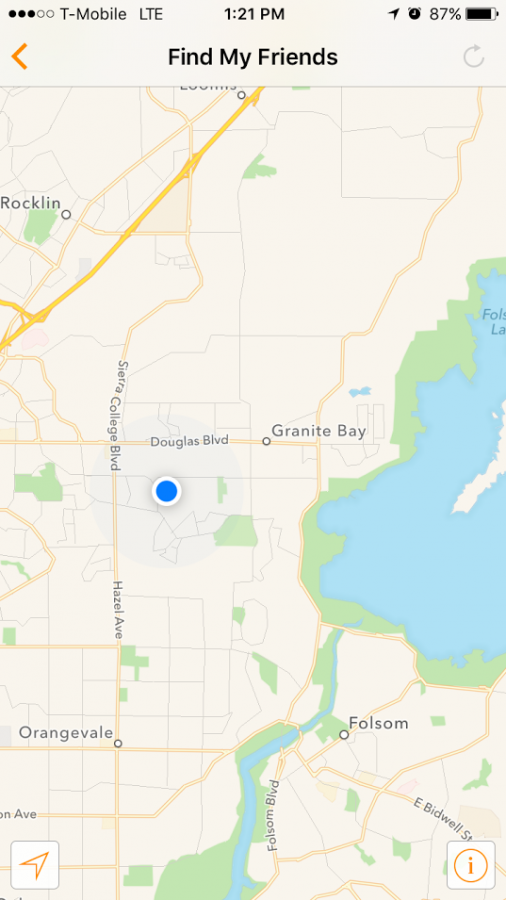 “Find my Friends”: the app that has ignited a new frenzical trend among high school students. The app is pre-integrated into an Apple user’s iPhone for the purpose of tracking one’s friends or family to determine their whereabouts.

The app provides the ability to track someone’s location from an iPhone as long as they extend permission.

Each individual being tracked will show up as a small dot on a map with their initials and their distance from the tracker’s location.

“It’s fun to know where your friends are instead of having to call or text them asking where they are,” said Granite Bay High School senior Rhanda Abasi who participates in this trend.

With “Find My Friends”, addresses are no longer needed since directions are instantaneously provided to each “dot’s” specific location.

“A pro is definitely being able to just go to your friends’ locations whenever, but a con is you can’t be as sneaky when you don’t want to hang out with your friends. Like they can just see when you’re at your house and show up even if you don’t want them there,” said junior Chase Mannsfeld.

Whether Apple’s original endeavor for the app was for safety reasons or finding excitement in tracking others, the youth of the 21st century have taken the primary purpose of the app to a new level.

“I track about 65 people, but my friend has reached the max number of people you can track which is around 80,” said Del Oro High School sophomore Thomas Flores.

Despite the benevolence of having the ability to see when and where one’s friends are at any particular moment, there are a few downsides.

“I track so many people I don’t know who I can trust with my location. Like what if someone I’m not friendly with asks someone who tracks me for my location? I don’t want that to happen so I turn it off a lot,” Flores said.

Flores mentioned how a group of his male friends who attend Granite Bay High School merely show up to his friend’s location if she doesn’t respond to their calls or text messages, which is frequent.

“A pro of the app is being aware of where everyone is. (In terms of) cons, I think teens are (really) crazy and if they want to
find your address, they will,” Flores said.

A majority of teens claim their primary reason for using the app is for having the ability to go to their friends’ locations without the hassle of having to call or obtain addresses.

On the flipside, various teens view “Find My Friends” as solely negative for reasons such as privacy, social stigma, and practicality.

“I don’t participate in this trend because I think it’s weird (that) people track each other. I don’t want people to track me all the time,” GBHS junior Jessica Baker said.

Apple has acknowledged that some iPhone users are uneasy with someone having the constant ability to track their location, and has implemented solutions in relation to that problem.

“I know parents use it to track their kids, but I don’t really see the point in friends tracking each other. It’s creepy,” Baker said.

Apple has placed multiple safeguard walls in the system to prevent any dangerous possibilities.

The app allows the user to stop sharing their location at any time with the “Hide from Followers” option.

“At lunch at I can see who is ditching from Del Oro and even Granite Bay,” Flores said. “I’m guessing they didn’t remember to turn their location off.”

Even though the original release date of the app was in 2011, Apple permanently added it to iCloud in October of 2015, and ever since then, it has become an increasingly popular trend with teen users.

“I don’t think the trend will be as crazy (in the future) as it is now but I think people will definitely still use it,” said Flores.