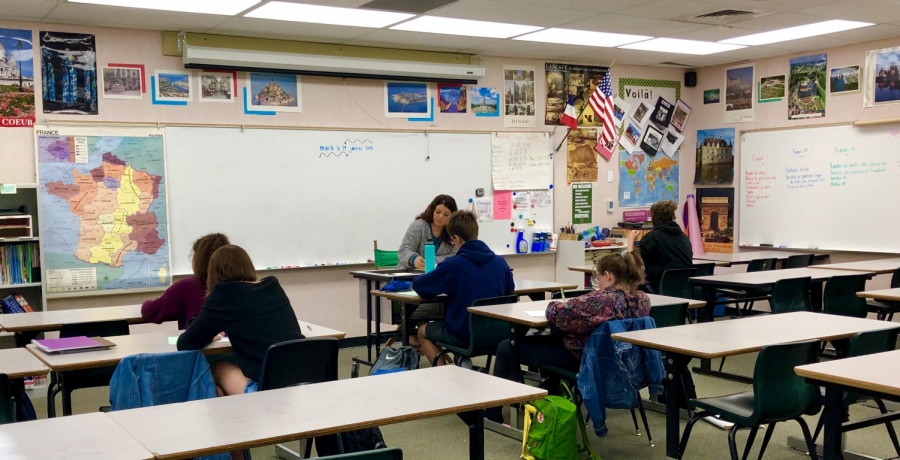 Every year, the French program at Granite Bay High School finds itself having to fight to keep its spot. With a significantly smaller department than the Spanish program, the two French teachers – Lynne Guerné and Celine Genève-Brown – face many obstacles to keep it alive.

GBHS is the only remaining high school in the Roseville Joint Union High School District with both  Advanced Placement and International Baccalaureate French classes. Still, the value of the French program has been called into question.

Both Guerné and Genève-Brown are highly qualified, so their teaching qualities are not the source of the issue. The students who take the AP and IB French exams are well prepared, and the success rate for both tests remains high.

In fact, students from the program have expressed their affection for the class, including AP French student Izzy Lux.

“You do get to know everyone really well, and it makes it a fun learning environment,” said Lux, who has spent the last four terms (and counting) in the French program. “I’ve had a pretty good experience as I’m now able to speak pretty fluently and understand everything.”

So why does the French program face opposition each year in preserving the language courses at GBHS? And why are some of the class sizes so small?

Part of the problem is the stigma that learning French language carries at GBHS. While many students consider the language beautiful, elegant even, it is also widely regarded as very challenging.

“There’s the idea that French is a harder language to learn,” Lux said.

This preconceived notion that French is too challenging for students exists among many students not involved in the program, but the reality is quite the opposite.

“The French courses at GB are full of games and fun projects that really help you grow for someone trying to learn a new language,” said Hanna Myers, a sophomore in French 3.

In reality, French isn’t the monstrous challenge some students perceive it to be. While it is formidable, the classes are just as manageable as any other language class.

“I really try to work on my job as a teacher, so that the class is viewed positively, and the biggest thing that I work on is spreading the word about our program and breaking the myth that Spanish is easy,” Genève-Brown said “That is what you hear, the rhetoric out there is that it’s harder …  and so I try to make it as fun and engaging as I can make it.”

In addition to being regarded as a significantly difficult language, students often think French isn’t as useful in California – one of four U.S. states that border Mexico – as Spanish.

However, Guerné said the French language can be quite useful regardless of where you live.

“French is so valuable,” Guerné said. “French is spoken all throughout the world … and if (students) want to study literature … anything in science and even in math, it has so many applications. We always think Spanish is more useful because we hear it more often, but out in the world actually, French has such an influence.”

There are 29 countries and territories worldwide that have French as one of their official languages.

That includes countries in Europe, like Belgium and Switzerland, as well as many countries in Africa like Senegal, Chad and Madagascar. French is also one of the official languages of our northern neighbor, Canada.

But the teachers haven’t given up on the program, and they have gone to lengths to keep the program alive.

“We’ve tried a lot of things in the past (to grow the program),” Guerné said. “For the eighth grade orientation we’ve done a presentation, we’ve recorded a video about why people should take French, we’ve talked to as many people as we can, we’ve talked to the counselors … helping us to put students into the classes.”

Still, despite the challenges, there are lots of reasons why advocates for French at GBHS say the language should still be taught.

“We work really hard,” Genève-Brown said. “Exposure is honestly one of the best things that we can do short of kids talking to each other, starting to break down the myth that it’s harder …  that is what’s going to help us.”

“We do fight a tsunami of sorts, and so the more that we can do here, and the more that people talk about us, the better that we are going to fare as a program.”