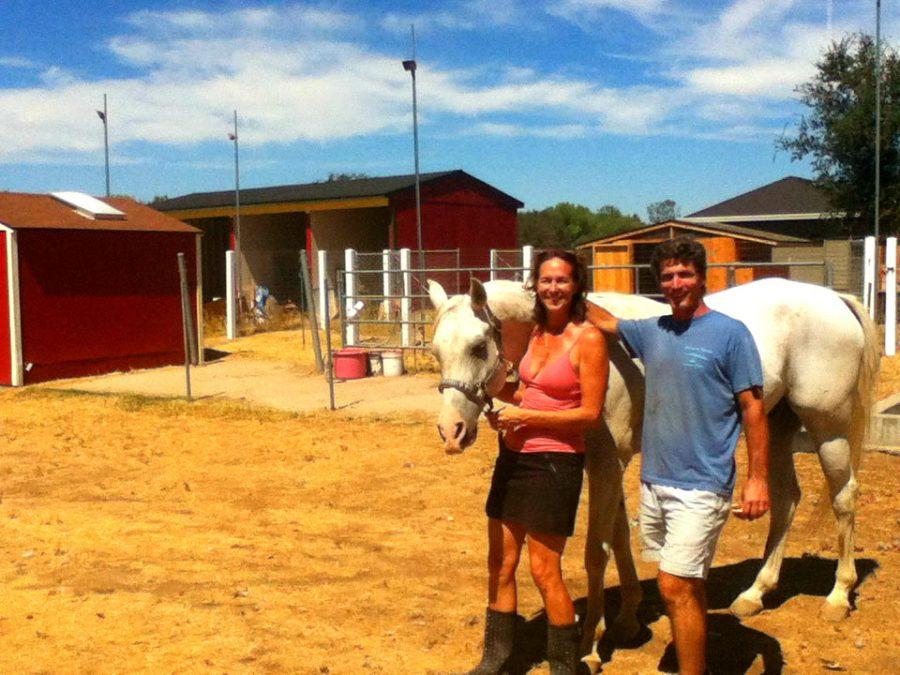 A vast, sparsely vegetated swath of dusty ground covered with chicken feathers seems more likely to be found in an old Western movie than the suburbs. But this pastoral scene exists just half a mile away from Granite Bay High School, on a ranch christened “Hearts Landing.”

Located on 8902 Quail Lane, the site will be a “drug and alcohol-free place (for teens) to gather and grow self-esteem with new skills and responsibilities,” according to the organization’s executive summary.

Features such as a co-op garden, horse stables, pickup sports field, educational center and fire pit are examples of some of the key attractions the site – colloquially known as ‘The Ranch’ to attendees – is planned to host.

Originally, the idea for the site was entirely the brainchild of the Donna and Mike Frey, the parents of a GBHS junior.

After moving to the Granite Bay area last September, they quickly realized the immense potential for recreational use of the land they had just purchased, including the expansive 3.5 acres and proximity to the GBHS campus.

In order to implement their plan, the Freys contacted local community leaders, enlisting their help to design and construct the site.

“It’s been great to connect with people in the community,” said Donna, who has been in contact with local business Red Barn Studios as well as Bayside Church leader Rob Maxey. “We have to be in collaboration because it’s huge. This is 3.5 acres of changing.”

To develop a more detailed plan of the site, local landscape designer Annette Wyrick, who has a degree in advanced landscape design from the California School of Landscape Design, offered her services.

“I developed a design program based on a consultation with Donna and Mike,” Wyrick said in an email. Wyrick and Donna had met at a prayer meeting; Donna had prayed for the prosperity of Hearts Landing, and Wyrick’s interest was immediately piqued.

“animal care, a vegetable garden, a fire pit, and a sports field” – and the venues through which people and vehicles move through the site.  After the first consultation, she visited two more times, devising a concept plan with design principles and site measurements. Lastly, Wyrick and the Freys once again met to revise the concept plan, including “a larger sports field, a more central fire pit, and a circular walk through the vegetable garden.”

According to Wyrick, the most ambitious feature of the project so far is the vegetable garden, centered around a pergola-framed fire pit, although a proposed event center may be a close second.

Due to the sheer enormity of the undertaking, both financial and work-related, the Freys have relied on the efforts of numerous donors and volunteers.

“We’re doing a lot of fundraising,” Donna said. “We need more fundraising! We’re doing a drive for all the trees that we’re implementing around here – someone can adopt a tree, plant a tree in memory of a friend or grandparent, and we’ll have a plaque in front of each tree that’s says who it’s for.

Another option for donors is to ‘adopt’ a barn stall, wherein each donor pays for all the costs associated with a single stall for a year – money for hay, maintenance, and the services of animal care workers.

“We want this this place to be available to kids,” Donna said, “whether they have the financial wealth or not.”

In addition to financial assistance, the Freys have also been able to recruit volunteers to help construct the ranch. Freshman Danielle Sims has been working on a Girl Scouts silver award project in the Hearts Landing barn.

“I’m turning an old barn office into a girls hang out space,” Sims said. “I plan to put old horse bridles and other old horse-related things on the walls. I’m thinking about maybe painting the walls and putting in a couch, a couple of chairs and a coffee table.”

While putting her room together, Sims faced several technical considerations.

“I had a contractor come in to talk about raising the ceiling and putting in a window,” Sims said. “I’ve also had an electrician come in and look at all the electrical lines…and I’m going to ask a friend’s mom to help me design the room.”

Learning how to deal with hands-on construction work, Donna said, is one of the most significant benefits of becoming involved with the Hearts Landing project.

“Learning how to do all kinds of construction work is very handy,” Donna said, “if (volunteers are) going to use those skills in a job, or not. Some adults don’t learn those skills until they’re 40 or 50 years old.”

Outreach to high school students, especially GBHS students, is one of the goals of the Hearts Landing project. Since last January, the site has hosted several people and events, both locals from Bayside Church as well as AmeriCorps volunteers. With a total of about 500 visitors in eight months, Donna hopes that high school students will attend more events in the future.
I (think GBHS students will find the site useful) because it is so close to school and it’s a great, well-run organization that creates a safe and fun environment, Sims said.
Possible future events include a ‘fifth quarter’ hangout, furnished with food, music, and a campfire, as an alternative to typical high school parties; sit-in movies; sports events; and a community-based garden.

These activities were designed with the goal of “creating buildings blocks to reach the hearts of teens” in mind, as the organization’s executive summary states. Donna believes that the high rate of technology use among teenagers contributes to negative feelings which impact emotional stability, which was a key motivation for the initiation of the project.

“One of the saddest things that I’ve seen is that even adults, at a dinner table, would rather be on their (electronic) devices, not even talking.  We’re losing one of the best things we have in life, our relationships and our network of people.  I want to create a network for these kids.”

“It’s a place for people to come and for them to really let go, open up…for their hearts to land,” Donna said.