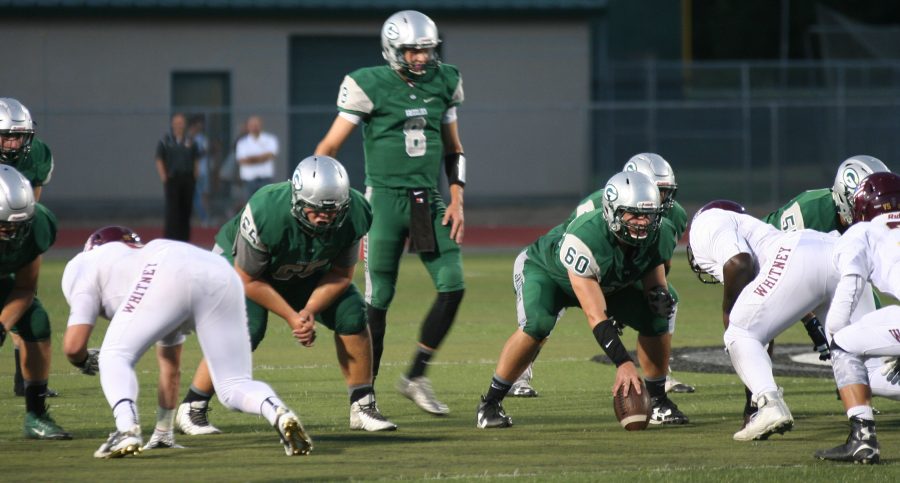 It’s been a rough start for the Granite Bay High football team, but there are seven more games and plenty of room for improvement for the Grizzlies.

Football is one of the highest-attended sporting events at GBHS, and this season will not be different. Even though the varsity football team has lost its first two non-league games to Jesuit and Whitney, they defeated Oak Grove of San Jose, bringing hope of an exciting season.

Coach Jeff Evans says “the boys will toughen up and cut down on the mistakes,” which will hopefully result in victories for the Grizzlies.

Many students as well as athletes are looking forward to the rest of the season whether they are cheering on the football team in the stands or they’re on the field playing. Senior Steve Trythall says that he is most looking forward to “home games and getting the community to come out and watch.”

Girls’ Tennis
The girls’ tennis team is looking much stronger this year with many incoming freshmen and sophomores joining the team.

Senior Genna Kozlowski says she was most looking forward to the Fresno Tennis Tournament, which was last weekend, because “there are a lot of new girls on the team to meet and get to know better.”

In the Fresno tournament, the tennis team lost the event, but they fought hard and some students won their matches.

Boys’ Water Polo
If they play as well as last year, the GBHS boys’ water polo team is sure to not disappoint.

Senior Conor Macdonald plans on – and is looking forward to – “winning sections” this fall.

If the Grizzlies make it to the Sac-Joaquin Section tournament, Tribe members could find themselves at a pool deck cheering the team on to claim the title of section champs.

Girls’ Water Polo
The Grizzlies have struggled at the beginning of the year, but they have a promising fall season ahead of them as league games continue.

Several key players graduated last year, which has been challenging for the team. Fortunately, the Grizzlies have bounced back and are learning how to work together in the pool.

Senior Ann-Marie Siedel says there is “ an amazing team atmosphere which hopefully will show on the scoreboard and in the pool.”

Girls’ Volleyball
Hoping to return to sections this year, girls’ volleyball is off to a great start and has a strong team.

Senior Julia Reese says “the team is still figuring out how to work better together, but overall it’s a very good team”

Many sophomores have moved up to varsity positions this season, so the team has lots of room for growth and improvement.

Cross Country
Alex Beitia broke the meet record at the Maidu Invitational in early August, just the start of a great season for cross country.

Not only did the runners strengthen as individuals, but the team also strengthened as a whole. The cross country team – which competes in girls and boys divisions but trains as one large group – has 20 athletes more than usual, making the grand total more than 80.

Senior Tre Lockwood says he is looking forward to “some of the bigger races like Stanford and state,” which are two races for the top varsity runners.

Girls’ Golf
Girls’ golf is preparing for another successful season.

All golfers will be returning from last year’s team with the exception of one, which will benefit the Grizzlies because they have all been practicing together and all have previous experience.

Junior Sienna Lyford says she expects “the team to continue to work hard,” which will aid them in their effort to have another accomplished season.