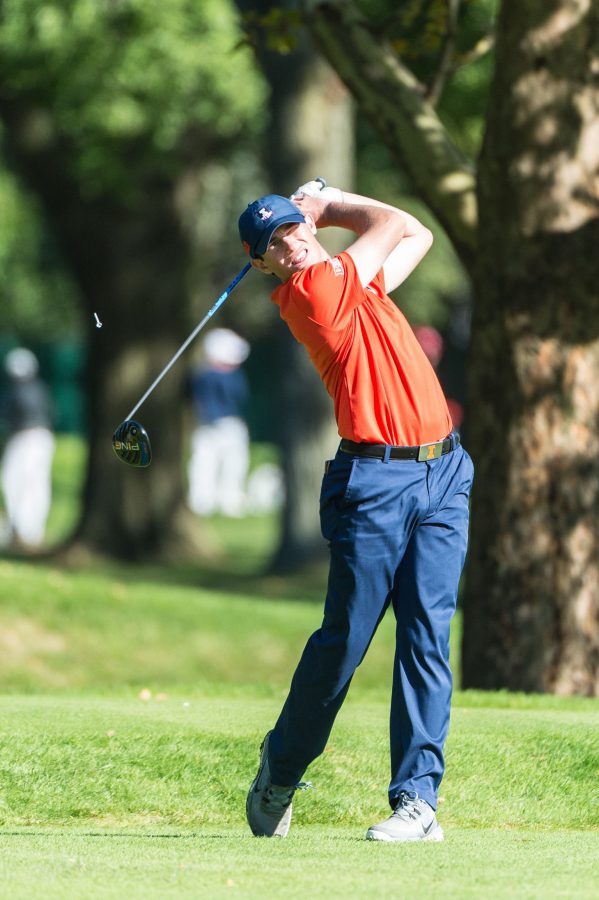 Granite Bay High School not only produces academically talented men and women, but also superb athletes – and Bryan Baumgarten is living proof of this.

Baumgarten, a 2015 GBHS graduate, is currently in his freshman year at the University of Illinois at Urbana-Champaign majoring in Business and playing on the men’s golf team.

Just like all incoming freshman, he had to adjust to college, balancing the demands of his academic curriculum and of playing for a prominent and competitive Division 1 sports team.

“The shift from high school to college was extreme,” Baumgarten said.  “All the things I took for granted like laundry and friends all of the sudden disappeared.”

GBHS instilled in Baumgarten the qualities necessary for college success.

“Academically, Granite Bay taught me to how to be proactive and get things done,” Baumgarten said.

He also directly benefited from his time representing GBHS on the Varsity Boy’s Golf Team for three of his four years.

“Golf wise, Granite Bay provided a very competitive atmosphere that always forced me to push myself to be the best I could be,” Baumgarten stated.

The men’s golf program at the University of Illinois at Urbana-Champaign clearly sensed this in Baumgarten when they recruited him to play golf for their program, which has been in the top five teams at the NCAA National Championships for each of its last four seasons.

This season’s results have proven just as promising, with the team finishing 1st in four of five fall tournaments.

Most recently, the team competed in and won the East Lake Cup in Atlanta, Georgia. Baumgarten has been instrumental in the seven-man team’s success, especially at East Lake.

“Winning East Lake is one of my greatest accomplishments in my entire golf career,” Baumgarten said.

Starting as a freshman is one thing, but playing in the final pairing in the title match against defending NCAA champion Oregon is another – and that’s exactly the position Baumgarten found himself in.

“I was extremely happy when my coach put me in the anchor spot in the championship match,” Baumgarten said. “It allowed me to prove myself.”

He ended up defeating his opponent five and four, including two incredible hole-outs from the bunker, to bring home the victory for Illinois.

“To come out and get the win that clinched our team victory was special and something I won’t ever forget,” Baumgarten said.

“I thought Bryan was one of the neatest young men we’ve ever had in this program,” Healy said.

“Bryan was one of those athletes who never seemed to allow adversity to affect him,” Healy said. “In fact, it usually made him a little bit sharper and made him compete even harder.”

With Baumgarten’s stellar contribution to Granite Bay’s golf team, Healy also expected to see great things from him in college as well.

“I’m not surprised that, as a true freshman, he is starting for one of the top five programs in the nation,” Healy said. “I think he’s that good – I think he can take this as far as he wants to go.”

While the future can hold many paths for Baumgarten, Healy is supportive of whatever he decides and is confident in his long-term abilities.

“If he wants to go into business, if he wants to do other things with his skills, more power to him,” Healy said. “But at the same time, do I think he has the potential to play professionally? Yeah, I really do.”

As Baumgarten looks ahead to Illinois’ spring tournament schedule that will take him all over the country, he will likely continue as a key contributor to the team’s success, as they vie for the NCAA championship title.

Clearly, Baumgarten hasn’t disappointed so far, and Healy sees a nothing but a bright future ahead of him.

“Bryan’s one of those kids who, essentially, refuses to lose,” Healy said. “He’s a multi-talented kid with a phenomenal head his shoulders.”