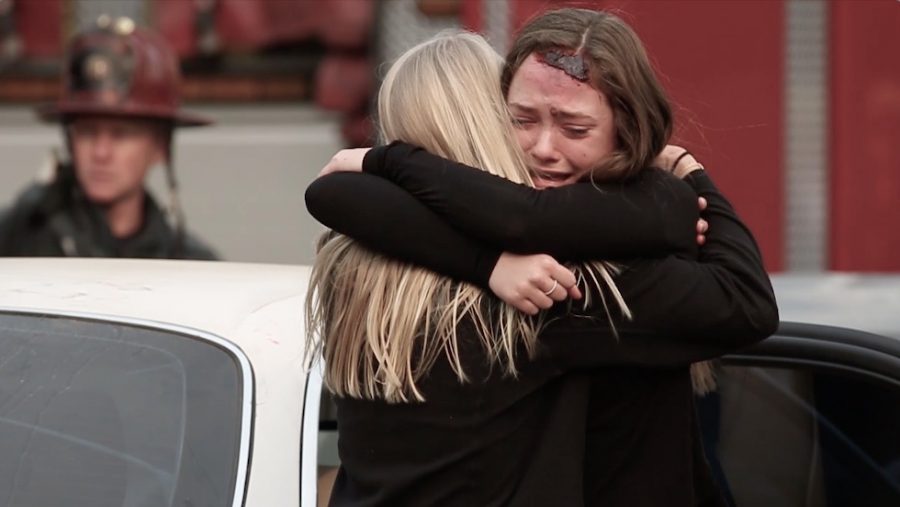 A still image from the GBTV film about the 2019 Every 15 Minutes program.

The GBTV Media Program spent hundreds of hours planning, filming and editing the video account of the Every 15 Minutes program at Granite Bay High, which was held Wednesday and Thursday, Nov. 14-15.

The first day of the program featured the accident scene, witnessed by more than 1,000 juniors and seniors. Before and after the second-period assembly, student participants joined the “living dead,” and were declared by California Highway Patrol, Placer County Sheriffs and school officials to be “dead.” Those students — 20 altogether — had an obituary read aloud to their teacher and fellow classmates in classroom they were departing.

Drama teacher Kyle Holmes played the mortician, who “claimed” the victims in each classroom.

In the accident, senior Matt Solone played the role of the drunk driver. Seniors TJ Robertson and Sofia Novaresi and junior Cole Phillips played victims who were “killed” in the accident, either on the scene or at the hospital. Samantha Hutchinson and Brenna Halloran, both juniors, “survived” the accident. Halloran and Robertson are girlfriend-boyfriend, which made the scenario more painful.

The second day featured a memorial service, including comments from participants, parents and a guest speaker who had experienced the tragedy of the loss of a family member, Rocklin resident Matthew George, 19, to a drunk-driving accident.