End to the End Zone

Tribe rolls back to stands for 2018 season 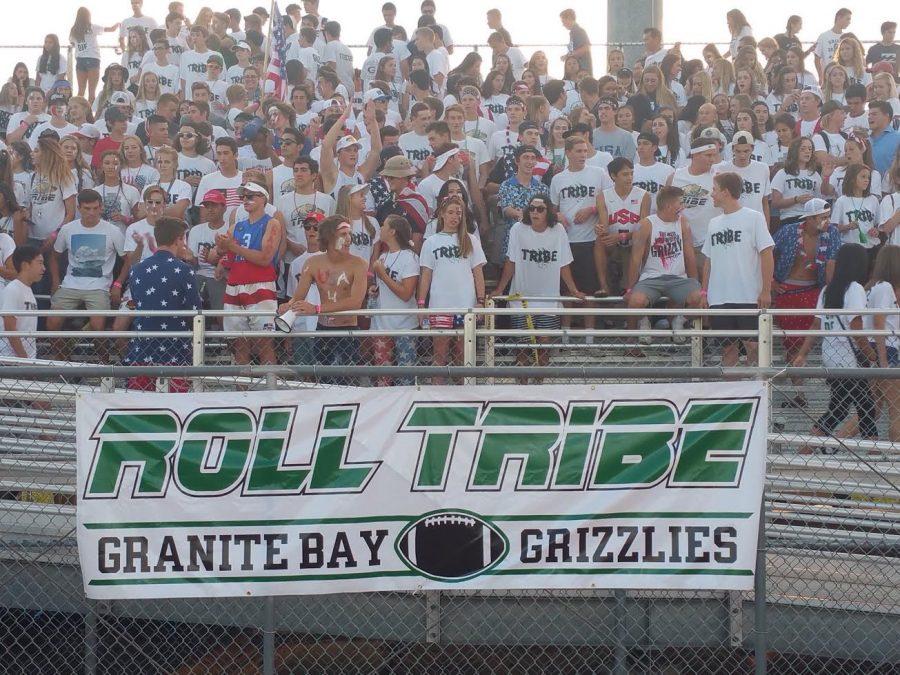 Special to the Gazette/STEVEN J. WILSON, 2016

The name of the student cheering section at Granite Bay High School, the "Tribe", is soon to be rebranded.

Granite Bay High School is known for many things, such as band, drama or the many sports teams. One way the school particularly stands out is by the student cheering section.

The Tribe has been going on for many years at GBHS, cheering on the sports programs. Most students’ favorite thing about the Tribe was not only how enthusiastic it is, but where they sat under the stadium lights at Friday night games.

This year, the Tribe has been moved to the stands, right next to the band, and away from the end zone.

Many freshmen were excited to come into high school to experience Friday Night Lights in a different way.

Instead of hanging out by the stadium entrance, the freshmen would be able to cheer on their football team from the famous student section.

Freshman Kerri Caulfield expressed her concerns with the situation involving the stands.

“I feel that we’re not as included and involved in the football games anymore, because we are in the stands, so the football players won’t see us,” Caulfield said.

Her older sisters were able to experience being in the end zone first hand, and now she will not be able to.

“My sisters both liked being in the end zone and they enjoyed all of that, so I was super excited,” Caulfield said.

Students who have experienced the positive aspects of the end zone are very disappointed to be moved to the stands. One upset student is senior football player Matt Solone.

“It’s going to be a whole different vibe for the football players this year,” Solone said. “Last year, when we would run out on the field, we’d go straight to the Tribe and high-five our friends. It just gave us a whole other energy boost for the game.”

Another reason the end zone was loved by the students was the interaction they got with the football players – almost as if they were in the game.

The interaction with the football players came a little too close during the GBHS playoff game against Antelope last fall. Blake Peterson, a senior running back last season, scored a touchdown that night and was then hit from behind by an angry Antelope defensive player. Mayhem ensued in front of the Tribe when fights broke out between players in the end zone. Some Tribe students also were fighting with Antelope players.

As a result, the stands became a semi-permanent home for the Tribe.

Many students believe this is the reason why Granite Bay’s student section has been moved. But according to assistant principal Greg Sloan, who specializes in athletics, it is not.

The Tribe stands were not up to safety standards because of their location, Sloan said. The rickety fence and small bleachers did not help the situation.

“Many district officials were at the game last year when the fight broke out, and it was brought to their attention that the seating for the Tribe was too small and not up to the safety standards,” Sloan said.

Getting safer bleachers standards could cost up to $45,000.

Will the spirit for the Tribe be the same being so far from the field and the action of the game?

“We are going to try to make different adjustments to make sure everyone has a fun time, but it will hopefully not affect our spirit,” Tribe leader Bennett Mantz said.

This year, students can expect new things from the Tribe – new dress-up themes, new chants and hopefully a loudspeaker. Athletic director Tim Healy sees one upside for the student section being in the stands – Tribe members can interact with the band.

According to Healy, to make this year great, “kids have to come together, get 800 kids in the Tribe, interact with band and cheer, and make the best of this situation.”

The next question is, will the Tribe ever go back to the beloved end zone?

“It’s not impossible to get back into the end zone,” Sloan said, “it’s just a conversation of what it might take to get there,”