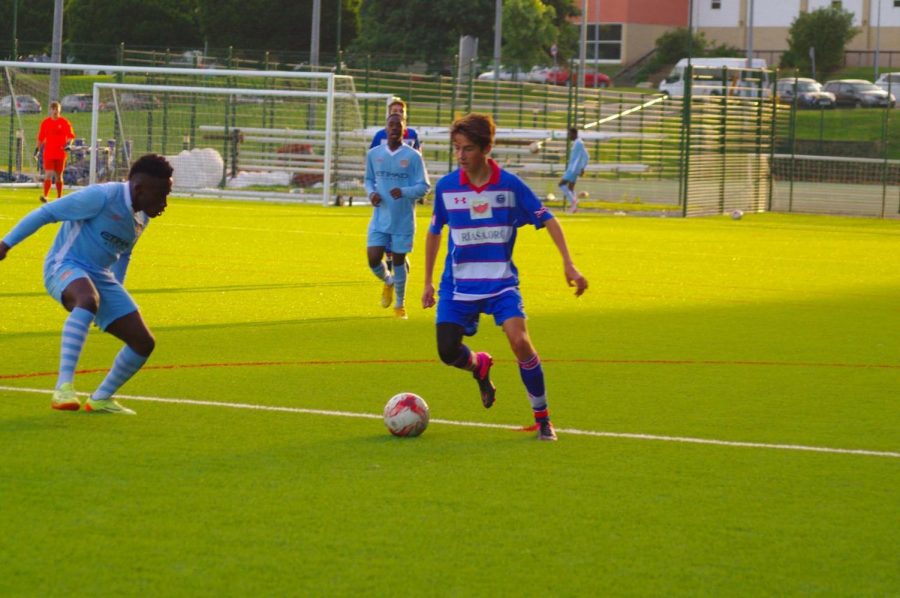 Connor Vivaldi dribbles down the field, representing RIASA College on his jersey.

After high school, everyone goes down their own path. Some people  however, chose to begin their journey a little bit early.

Many students at Granite Bay High School are choosing to wrap up their senior year and say their goodbyes earlier than most.

Although each of them are making the same big decision, there is a lot that goes into deciding to graduate early.

For Trinity Burley, the decision to graduate early came about when she realized she was not having the same experience that a lot of other students were during high school.

“I decided to graduate early, because I don’t really feel like I’m getting much out of the high school experience, and I’m ready to go out into real life, not just in the Granite Bay bubble life,” Burley said.

Nash Rood, a senior, had a parallel experience to Burley.

“I decided to graduate early because I am not particularly attached to high school, and I have an idea of what I want to do with my future and would like to take time to enrich my life outside of high school before college,” Rood said.

Other students have made the decision to graduate early because of colleges offering them irrefusable opportunities.

“I committed to play at my college (RIASA Soccer Academy) last December and immediately explored the option to be able to graduate early,” Connor Vivaldi said.  “I want to play soccer there as soon as possible.”

Students choosing to graduate early seem very optimistic about the process and the eventual outcome.

“I am very excited to graduate early and have more time to just do me without being stuck at school, five days a week,” Burley said.

Rood is also ready to move on from high school, although it’s not a decision without challenges.

“Yes I am excited about graduating early, although it’s somewhat stressful,” Rood said.

Some students are feeling more stress piling up on them to figure everything out before the year ends for them.

“Graduating early puts some extra pressure (on me) because it leaves a lot of extra space in my schedule that I have to figure out what to fill the time with because I refuse to sit around and be lazy,” Rood said.

Others are feeling more empowered by the deadline.

“It puts less pressure on me because having such a short period left of high school just excites and motivates me,” Burley said.

Having only a short amount of the high school year left, many students are ready to start the next step on their journey.

“First, I’m excited to be getting a head start on college by starting at Sierra (College) in January, but I’m also excited to get a more consistent job than the one I have now,” Burley said. “Also, I’ll have a more flexible schedule for modeling, which is nice.”

Some students are ready to have the free time to gain life experiences in new places.

“I’m most looking forward to being able to have more time to travel and get to see the world as well as get to start working towards the career I have in mind for myself,” Rood said.

Rood and Burley both plan on taking a break to come back and walk at graduation with the rest of the 2018 senior class and experience that milestone together.

Although the students are aware they will be missing out on many school events, they do not feel like their lives will be lacking anything.

“I was originally bummed about missing Senior Fifth Quarter, but one of my teachers made a point that by the time that comes around I will have been out experiencing college, so high school events won’t be something I’ll miss, which I think is true,” Burley said.

Rood agreed that not attending some school events is not a big deal for him.

“I feel like I will miss out on some events, but I don’t care that much because I went to a lot of the senior events last year, and I don’t really go to a lot of school events anyway,” Rood said.

Once again, students prove that the decision they’re making is worth the senior activities they will be missing out on.

“I’m going to miss several dances, Sober Grad night (and) Senior Fifth Quarter,” Vivaldi said. “In the end, I still would make the same choice 10 times out of 10.”

It is clear that graduating early is a very intriguing option to many students, and they make it apparent why it should definitely be considered.

“To people considering it but are wishy washy, just do it!” Burley said. “In my opinion, it just makes more sense than stretching out your senior year with a bunch of electives.”

“I would advise those graduating early to do it,” Rood said. “I personally think it is a great way to have more time to see the world and do things you wouldn’t have time to do if still in high school.”

Early graduation can be worthwhile to many students but, according to Rood, should be a well-planned decision.

“I would advise to specifically plan out your time for your semester off and avoid simply laying around and doing nothing,” Rood said. “High school is a great way to get free education, so if you decide to get out early, you should fill your time with things that will enrich your life and educate (yourself) in ways public school cannot do such as traveling or finding yourself or simply working and making money to finance your goals and future.”