What drugs are legal at GBHS? 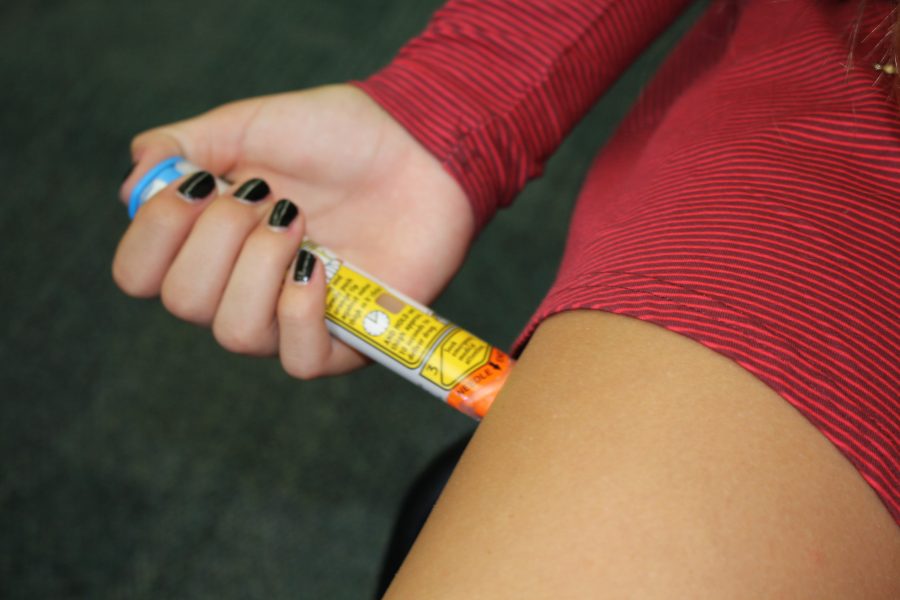 Sounds of wailing and despair are not usually associated with summer camp.

The child, Natalie Giorgi of Sacramento, took a bite of a Rice Krispies treat coated with what was, for her, a deadly poison – peanut butter – and died minutes later after multiple unsuccessful attempts to save her life.

An EpiPen containing an emergency allergy drug was administered to Giorgi right away, although Crabtree said no one predicted how serious the situation would become.

Giorgi’s mother and father were both attending the week of family camp.

“The mother was very calm,” Crabtree said. “She had given her daughter an EpiPen and had full confidence that this would pass. To comfort her … I gave her some Disney ‘Piglet’ ears to wear, and she laughed. She began to talk with her mom, saying that she was fine.”

Although multiple EpiPens injections were administered to Giorgi, once her symptoms escalated, paramedics and doctors were helpless against the poison.

She was soon pronounced dead.

“It’s scary to think that I was talking and laughing with her … and moments after, she was dead,” Crabtree said.

After witnessing the death, Crabtree said her life was forever changed.

“After her death … I spent nights crying myself to sleep,” Crabtree said. “I kept waking up screaming – all I wanted to do was be strong, but I was weak.”

Such an experience prompted Crabtree to think about the laws and implications of EpiPen administration – specifically on school campuses. Approximately 4 to 6 percent of all students have a food allergy, according to the U.S. Centers for Disease Control.

School nurse Jenny Serrano clarified the GBHS policies and talked about the flexibility of the procedures.

If a student is having an allergic reaction, Serrano said, anyone is allowed to administer the EpiPen.

However, since a vast majority of students with allergies are trained to administer their own EpiPen in the case of an emergency, Serrano said most will not need intervention from an outside source. But if they are incapacitated, teachers can intervene.

“They usually won’t hesitate and they’ll give it to themselves,” Serrano said. “If for some reason they can’t … anyone … can do it.”

Serrano said teachers are not usually trained in how to react to a food allergy emergency. However, she said EpiPens are fairly easy to use, even for those who have no specific training in the use of the devices.

Advanced Placement American government teacher Jarrod Westberg said he’s never received training for EpiPen administration. If an emergency allergy situation happened in his classroom, Westberg said he would “be calling down to the office.”

Westberg said he’s at least slightly uncomfortable with the lack of training because a student’s life could be on the line.

“If you’re talking about someone that possibly could be dying, they’re not going to be able to administer something to themselves,” Westberg said.

Jane Robertus, a home-schooled sophomore who lives in the Granite Bay area, suffers from a serious peanut allergy, but she has been trained to administer her own EpiPen.

“If I’m ever in a situation where there are no people around or the people aren’t allowed to administer the medicine, I know how,” Robertus said. “I practiced on a peach.”

Although Robertus is home-schooled, she said she thinks the loose school policy regarding EpiPen administration is an appropriate precaution.

“I still think it’s a good idea to have the teachers be allowed to (administer) in case the student is unable,” Robertus said.

Students must register their possession of prescription and over-the-counter drugs with the school nurse, according to school district policy. Normally, they must also keep those substances in the school nurse’s office. There are, however, two exceptions.

“There are only two medications that students are allowed to carry (on campus),” Serrano said. “One’s an inhaler for asthma, and the other is an EpiPen.”

Students who carry legal over-the-counter drugs – substances such as ibuprofen or aspirin, for example – are actually violating the school’s drug possession policy.

According to Serrano, if students want to have access to such medications during the school day, they must come and get a dose from the nurse. Serrano said teachers are legally allowed to administer EpiPens because they are one of two legal drugs allowed on campus. Teachers would not be allowed to administer any other drug to students.

For prescription or over-the-counter drugs and medications, students “have to bring in a … form filled out by their doctor and then they leave the meds here with me,” Serrano said. “All medication is kept in a locked cupboard. I get a lot of students coming in asking if I can give them a Tylenol, Advil, etcetera, but unless they already have something on file with me, I’m not allowed to give out any medications.”

This is a policy that is widely ignored on the GBHS campus.

The Gazette conducted an informal poll of three GBHS classrooms and asked students if they had ever used a legal, over-the-counter or prescribed substance during the school day that was not approved or administered by the nurse.

More than 80 percent of students polled said they had.

“I appreciate the fact that this can be frustrating for students, and they may feel it’s just easier to carry medications in their backpacks,” Serrano said. “Students should know, however, if those meds are found on them, even just over-the-counter items, there may be consequences.”

Westberg, however, said he thinks the policy for over-the counter medications is “silly” and “not reasonable.”

“If (a student suffering from a food allergy reaction falls) into a state of shock, it (is) very important that someone can help them,” Crabtree said.

Crabtree said her experience at Camp Sacramento in 2013 taught her a multitude of lessons, not just about allergy laws, but about the seriousness of allergies themselves.

“I want people to take allergies more seriously,” Crabtree said. “If somebody tells you that they’re feeling sick, for God’s sake, don’t wait.”