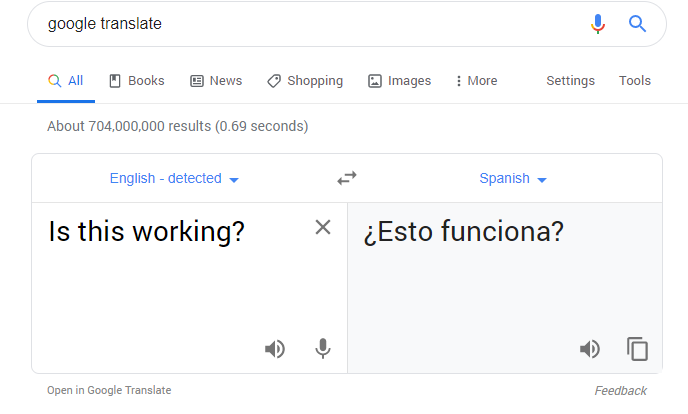 Students use Google Translate pretty often, much to the chagrin of the world language department.

Launched in April of 2006, Google Translate is a free platform whose main purpose is to be an automatic language translation machine.

According to K-International, Google Translate is available in 104 languages, has more than 500 million users and translates more than 100 billion words per day.

At Granite Bay High, most  students in language classes use Google Translate as a platform to help out with homework or maybe to translate a word or two here and there. But, lately, many  freshmen are taking advantage of this platform by using Google Translate to do all of their world language homework and even translating paragraphs.

Freshman Taylor Flynn is currently in Spanish 1. Being introduced to a whole new language, she said, was difficult at first, that’s where Google Translate came in.

“My teacher tells me not to use it mostly because it gives you the wrong conjugations and gender forms,” Flynn said. “I use Google Translate to check my work and look up words I don’t know very well.”

According to Grant Adams, who teaches Spanish, one of the most problematic issues with Google Translate is it sometimes provides inaccurate translations. Adams said that, depending on the class level, he allows his students to use Google Translate.

“Spanish 1, 2, and even 3, there really is no need for Google Translate at all,” Adams said. “My higher-level classes, I’ll let them translate single, individual words, not entire sentences.”

Adams added, “Words, it’s like a dictionary. I could look up ‘book’ and find ‘libro,’ but if they look up an entire sentence, it will translate back something that might be awkward and inaccurate. Plus, (students) might not even know what it means and just use the word they were given assuming it’s correct.”

Many teachers don’t like their students using Google Translate and some even forbid it, but regardless of what their teachers say, some students are using it anyway.

“I use Google Translate when I don’t know what a question is asking or what a word means,” Chandler said.

He said overall, he thinks Google Translate has had a positive impact on his grades because he would rather get a little help with something he doesn’t quite understand than just fill in a random answer.

“My teacher probably doesn’t want me using Google Translate because then everyone could just use Google Translate to do their homework instead of actually learning the translations,” Hammed said.

In 2016, Google Translate launched an update that was supposed to use Deep Learning Techniques to translate whole sentences. The new update used a system called Neural Machine Translation.

Although this new update was supposed to create correct translations for its users, teachers still find incorrect sentences and phrases.

“If someone uses Google Translate, I can spot it from a mile away, it’s so easy,” Adams said. “You can tell because most of the time words won’t be properly conjugated or don’t mean what the student was intending to say.”

Although Google Translate is overused by many freshmen in their language classes, especially Spanish, Flynn said she thinks there are some benefits.

“Hopefully like me, (my peers) are understanding the material they are learning, and when they do use Google Translate, it goes through their brain,” Flynn said, “before it goes onto their paper.”