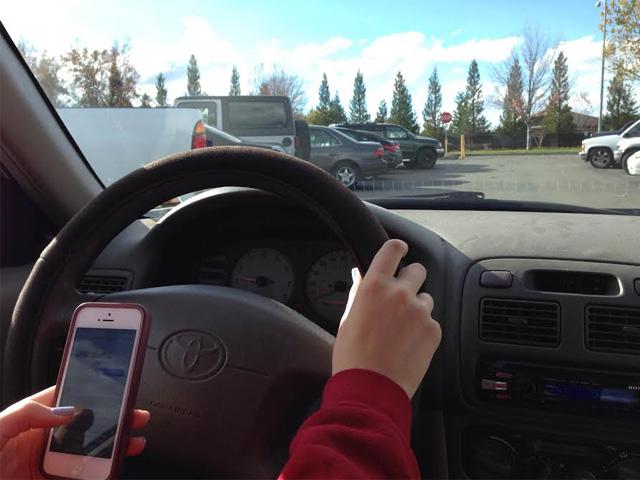 According to the US Government Website for Distracted Driving, 10 percent of all drivers under the age of 20 involved in fatal car crashes were driving while distracted at the time of the crash.

“It’s a common thing (amongst GBHS students),” junior Parker Matheson said. “I believe kids underestimate how dangerous it is. They need to have the willpower to not (text and drive).”

Matheson said in general, other people including himself were more cautious drivers when they were new to driving, and once they get more comfortable, they feel more confident in their ability to text while driving.

The Sports Marketing class put on the Every Glance is a Chance campaign. According to junior Alex Smith, their goal as a class was to raise awareness through advertising the possible results of distracted driving. They had a driving simulator that had drunk and distracted driving so that GBHS students were able to see the possible results of driving without full capacity.

Smith said Every Glance is a Chance was helpful in letting students know how dangerous distracted driving can be. However, Smith also recognizes that students may not be capable of actually making the conscious decision to not drive distractedly.

“Obviously, (distracted driving) is bad and you shouldn’t do it,” Smith said. “ Everybody has done it I’m sure. Yeah it happens, but you probably shouldn’t do it … It’s good that we’re doing (Every Glance is a Chance), but at the same time, it still happens.”

An estimated one in four car crashes involve cell phone use, according to the National Safety Council.

Junior Lulu Mansour learned her lesson about texting and driving when she unintentionally caused an accident while on her phone.

“Basically I was on my phone trying to change the song and I accidentally rear ended someone,” Mansour said. “I learned that being on my phone was a huge mistake and that I should never be using it while driving. Literally it takes a blink of an eye to cause an accident.”

Mansour expressed the importance of putting down your phone while driving, ignoring texts, calls and music.

On the other hand, junior Narges Kazerounian shared her experience when her and her mom were victims of a distracted driver.

“Me and my mom were in the car and my mom was driving,” Kazerounian said. “The light was green and it was turning yellow so my mom slowed down to stop. The car behind us thought that we were going to go, but we didn’t. He was texting at the same time and then he crashed into us and totalled our car.

We got full compensation because it was completely his fault since he was texting and driving. My mom hurt her back really bad and had to go in an ambulance.”

Kazerounian said she now recognizes the importance of not being a distracted driver. She said that sometimes, her friends drive while distracted, but offers a solution of texting for her friends when they are driving, taking away their temptation.

“I think texting and driving is almost on the same level as drunk driving,” Kazerounian said. “Even though you’re sober, you’re distracted, and that’s even worse. You have the full capacity to pay attention and prevent accidents.”

Distracted driving has the potential to injure and kill, and a quick glance at a phone results in the chance for affliction.

“Seeing my mom getting put into an ambulance (made me realize) that you may think that it’s just a simple text, but that one text could take someone’s life,” Kazerounian said.