Covering campus life when there’s nothing left to cover

The GBHS media team adjusts their program to fit the new normalcy seen on campus. 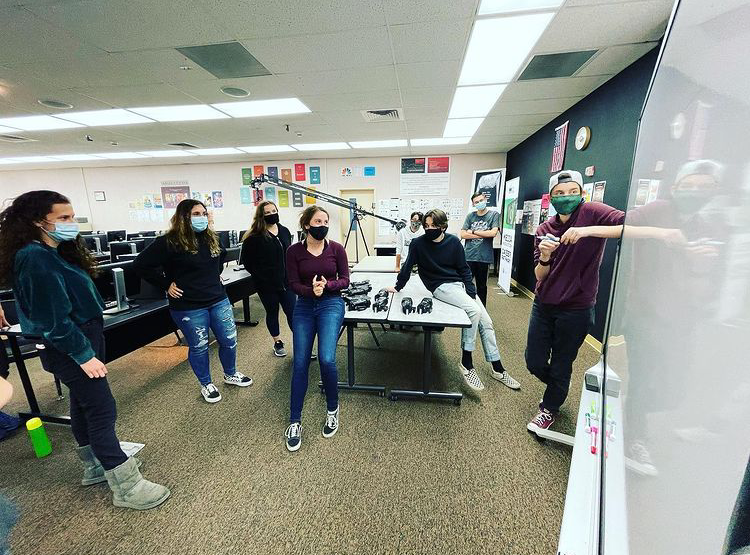 It seems almost impossible that there wouldn’t be a sports game, event, dance or interview to talk about in the school’s morning bulletin, but with no one at school, that’s exactly what happened.

Due to the school’s inability to host large gatherings and normal in-person functions, events and life at school has changed with clubs, classes and sports all being affected differently.

The media production team, run by Mr. Weidkamp, was no different in that they needed to be creative in how they proceeded with their responsibilities of news bulletins, video announcements, podcasts and various other projects.

Lee Randolph, sophomore at GBHS, worked their way up to the role of the class’ producer after taking the introductory media production class in the Fall of 2019.

“We’ve got nothing to recap or announce,” Randolph said. “…(bulletins) have become less frequent because of that.”

The bulletin is the morning news announcement that covers upcoming events, things students need to know and interviews of staff and students. All bulletins are filmed and produced in the media productions studio at school and later played for students in class, which logistically produced difficulties when school first shut down in March.

“The biggest transition was…students do not have access to cameras or software anymore,” Weidkamp said.

Three weeks after everyone went home, the media team was able to produce an at home edition of the popular video bulletins, despite not having much to report on with no upcoming events.

“I appreciate how much Mr. Weidkamp has tried to adapt and make this class still rewarding for the students taking it,” said Sarah Thompson, sophomore at GBHS and a floor director for the bulletin.

Not having as frequent announcements has allowed the class to shift focus.

“We’ve (been able) to focus a lot more on the creative side of things,” Randolph said.

These creative projects include a podcast and the new “after hours” show including a music video with the dance team and the film festival.

Last year media held their first film festival which was open to student entries of music videos, documentaries, short films, animations and trailers. The final entries are put together to create a festival event that premiers on youtube this year in the month of May.

Previously the festival was only open for Granite Bay students, even if they weren’t in a media class but this year they are looking to expand the opportunity to also involve other schools in the area.

By adapting to a different way of doing things, GBHS media was able to continue traditions and even start new ones despite the challenges that they faced having to learn from home.