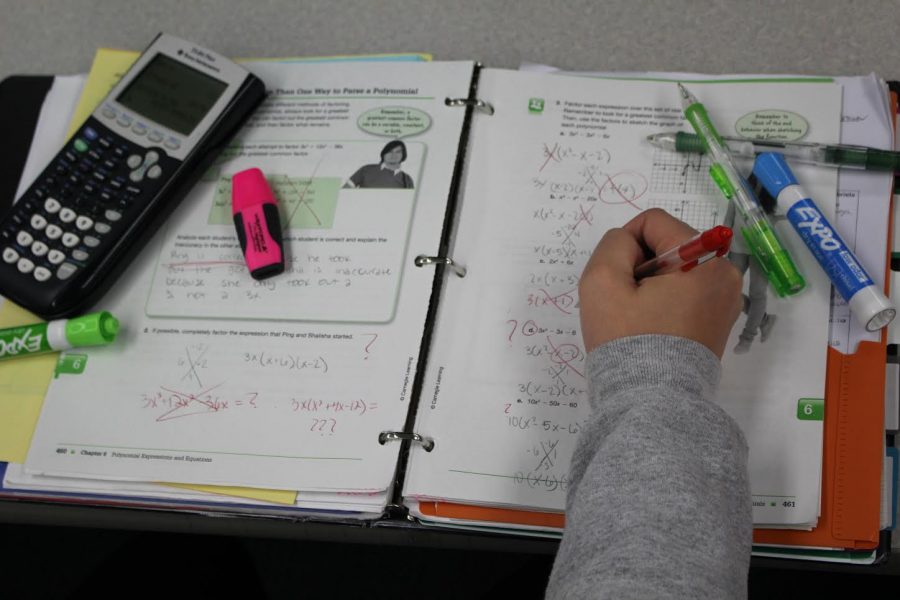 Now, the incoming freshman are automatically put into the system.

It was a drastic change not just for students, but teachers as well.

“The transition from our old traditional program to our new integrated program was a challenge,” Vaughan said.

“Giving students the opportunity to engage in productive struggle either by themselves or with their partner and groups has turned out to be one of the most rewarding experiences I’ve had in my career,” Vaughn said.

The point of the integrated system is to further common core and critical thinking.

While standard math classes are “teacher-centered” the integrated system is “student-centered.”

According to Vaughan, this means that in a teacher-centered class, a teacher will spend a lot of time on direct instruction.

“You’ll go and ask for help and the response will be like ‘oh, you know, work it out with people in your group’ (but) none of us really get it,” said GBHS junior Brittney Baisden.

“It’s easier for me to just do the work for my students,” Vaughan said.

“We are given performance tasks which take us hours on end to finish,”said GBHS junior Courtney Epstein.

“I really didn’t like it because the way they broke up the math in each class was weird, and they tried to do common core with the math which made everything harder,” Baker said.

Despite the difficulty level of the class, some students feel like their efforts to receive a good grade in the class pay off.

Some students say that the integrated system is beneficial for students.

“The IM system is beneficial at times because it gives students a more complex way to look at different problems to help better their understanding,” Epstein said.

Despite the varying opinions of students, Vaughan is confident that the system is incredibly beneficial.

“I have seen students make more connections with the ‘why’ more than ever,” Vaughan said. “Having the opportunity to practice problems and develop your own understanding makes math so much more meaningful. Having the experience… will make them a valuable member of any team.”