Commentary: MGTOW and some forms of modern feminism are equally abrasive 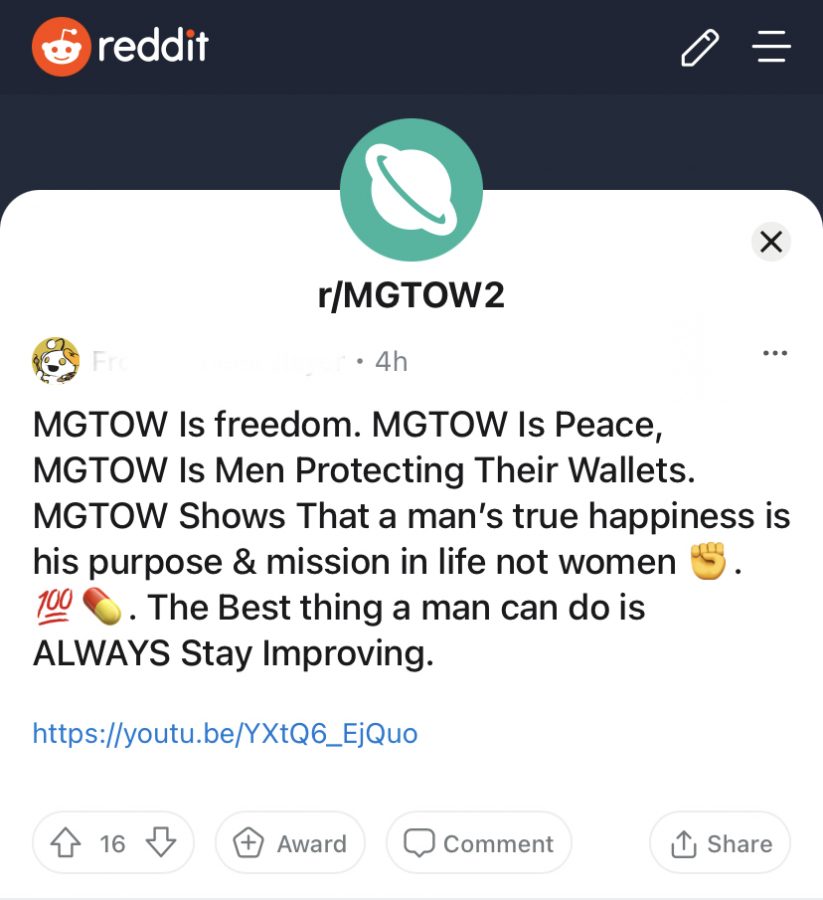 MGTOW is a group on Reddit that expresses anti-feminist views

Men Going Their Own Way is a group on the app Reddit dedicated to anti-feminism.

The description of the MGTOW page says, “This subreddit is for men going their own way, forging their own identities and paths to self-defined success.” I don’t see a problem with this description, but a look into the page reveals a different narrative.

It’s not a dedication to men bettering themselves and helping each other, it’s about tearing down feminism and women.

Modern feminism can be much the same. I have seen videos of feminists talking about how, “men are the biggest problem in the world,” or even a woman commenting on how she refuses to read a book or listen to music made by a man, because “we need to erase them from our minds.”

Historically, feminism has been a benevolent cause dedicated to women’s rights  and equality between men and women.

On both sides, intention is different than outcome. They are nominal ‘causes’ that people keep throwing themselves at as if something will change from all the complaints, the insults and the bigotry hurled across the aisle.

The problem is people refusing to look outside their group of like-minded people, creating an echo chamber of resentment and a vacuum of positive outlooks — perish the thought that opposing groups might try to talk through their differences. All of this contention, for the most part, takes place online, where people can hide behind a screen and deliberately avoid conversations they don’t want to have.

Something has to give if any positive progress is to be made.

Men and women will always live in the world together, and hate towards each other is the most backwards way of confronting an issue. It just creates an endless cycle.

Extremism aside, I feel that men and women need to be taking up conversations, in real life, whenever they have problems with each other. It might fill a lot of people with discomfort to do something like this, but I don’t see a better way to handle it.