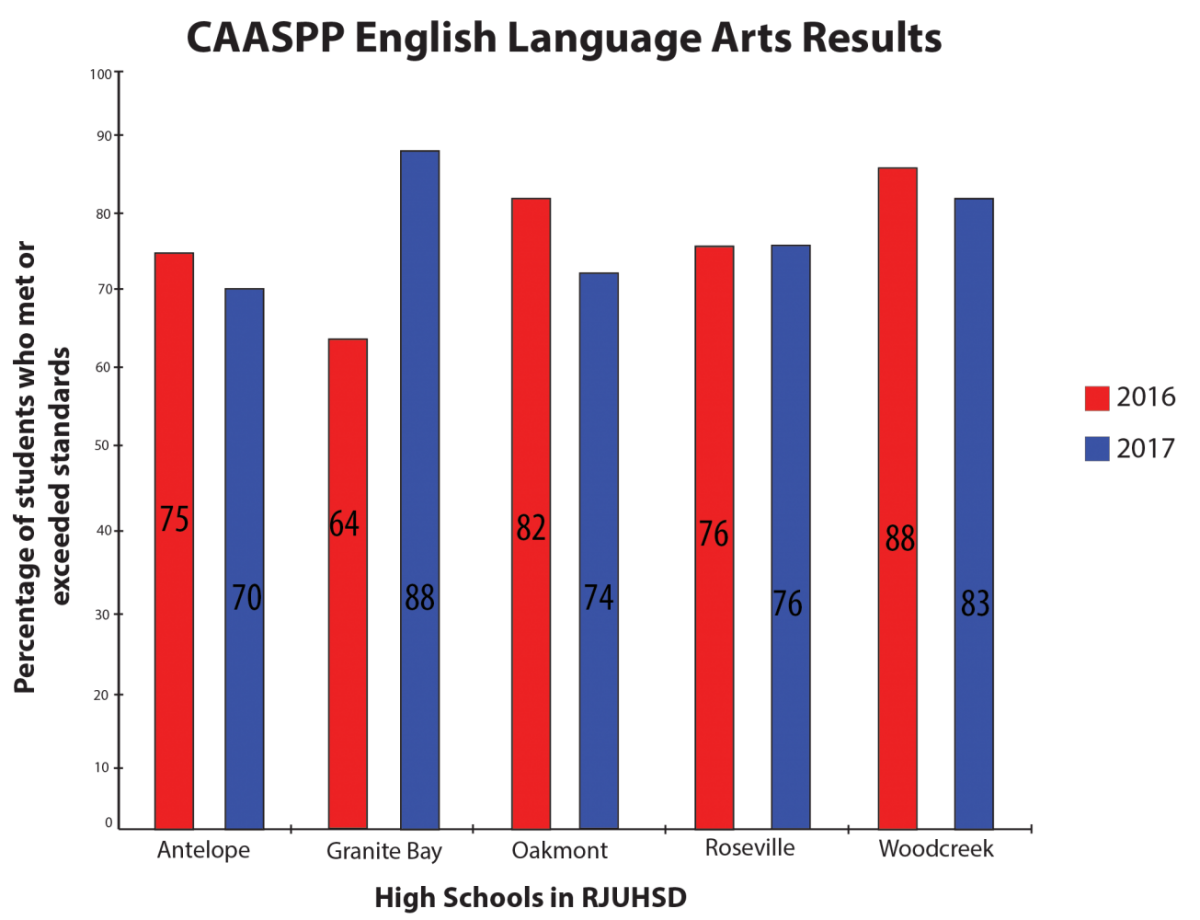 It’s said there are no secrets to achieving success – it’s the result of preparation, hard work and learning from failure.

Granite Bay High School’s current seniors, staff and administration can wholeheartedly agree after the seeing the results from the 2017 Smarter Balanced Summative Assessments, which are part of the California Assessment of Student Performance and Progress tests administered this past April.

The CAASPP, which replaced the Standardized Testing and Reporting tests in 2013 as the new state academic testing process, is taken by students in third grade and eighth grade, as well as by high school juniors. It consists of two parts – English language arts/literacy and mathematics.

These tests, which are based on and measured against California’s academic standards, are designed to ensure students are college and career ready when they graduate.

GBHS ranked higher than any other school in the Roseville Joint Union High School District. The next closest scores were earned by Woodcreek High, with 83 percent of its students meeting or exceeding the standards in ELA and 52 percent in math.

These topnotch CAASPP results do more than just afford GBHS bragging rights – they actually significantly affect the school and the students.

“CAASPP is a way of ranking schools in a way,” Leighton said. “When a college looks at a school and sees that last year’s class did so well on it and sees that they nailed it, that just makes their application (look better) and it makes them look like they came from a stronger school.”

Nayana Tiwari, a GBHS senior, understood the significance to her post-high school future and therefore gave her full effort on the test.

“If I apply to colleges and the whole school did well, that shows that I went to a challenging and really good school, and that gives me credibility,” Tiwari said.

This was not the case for the class of 2017, which posted inordinately low results, especially in the ELA section.

“Our English scores were the lowest in the region the year before, so it was just kind of embarrassing because we know that is not representative of us,” Leighton stated.

What happened in the 2016 testing process that resulted in such poor scores? GBHS assistant principal Jessup McGregor said he believes it stemmed primarily from an issue of communication between students and administration.

“I think there was miscommunication and misinformation around the value of the test,” McGregor said. “People didn’t see that (the test) actually mattered to them, and they were more focused on things that were more relevant to their life at the moment, such as (Advanced Placement) testing.”

In order to better understand the mindset and lack of motivation among many seniors at that time, McGregor and other administrators called some students in last year to discuss the discrepancy between their CAASPP results and GPAs.

“We actually interviewed quite a few students whose GPAs were really high and their test scores were really low,” McGregor said. ”The feedback we got from them was that they didn’t realize they needed to take it seriously.”

This lack of understanding had a far-reaching impact – it disqualified GBHS from earning the prestigious National Blue Ribbon Award in 2016.

The information about what went wrong in 2016 also prompted several changes in the 2017 testing process.

“We spent a lot more time trying to push out communication to families and students in terms of the value and importance of the test,” McGregor said.

GBHS senior Ethan Tabaie remembers this clearly during the time  leading up to the April test date.

“Teachers of mine talked to us about how we needed to do well on the test because last year’s students did not,” Tabaie said.

The staff and administration’s emphasis on the importance of the test led many students to reconsider the amount of effort they intended to put into it.

“Because of this, I think a lot of people had a feeling of responsibility for their scores and how it would affect the school,” Tabaie said.

Not only did staff increase awareness of the value of the test, they also experimented with time allowed for the assessments. This was intended to ease any potential adverse academic consequences or conflicts for students.

“We tried to squeeze (the test) into a shorter period of time to impact the least amount of class time,” McGregor said. “And we tried to move it as early in the year as we could to get it away from high-stakes testing.”

Based on the improvement in the test results, it is evident these changes had an impact. As well, the district decided to include CAASPP scores on student transcripts beginning in July of this year, which also sent a message to students.

However, it will still be some time before the state-wide testing is considered “perfect” from the perspective of students.

One area of student frustration arises from technology, as the tests are taken online via Chromebooks.

Several students ran into technological issues while taking the test that they otherwise could have used to their advantage.

“There was a calculator that popped up that I didn’t really notice, but apparently (it) was there for me the entire time,” Tabaie stated. “They should tell us how the website runs before we take the test.”

Students also had some concerns about the functionality of the Chromebooks.

“They don’t give you a regular mouse to use, and that makes me upset,” Tiwari said.

Other seniors like Connor Vivaldi said they believe the testing process itself has inherent downfalls.

“Not many high school kids want to come to school to take a test for that long,” Vivaldi said.

In his sophomore year, Vivaldi unsuccessfully attempted to not participate in the California Science Test, but he didn’t pursue an opt-out for junior testing.

“I tried to opt out of the science test sophomore year, but they made me come back and take it,” Vivaldi said. “So I wasn’t going to try to do that again because the administration was really annoying about it.”

The persistence of the administration in ensuring all students participated in the 2017 CAASPP testing process appears to have worked. While a few students did opt out of the test, according to McGregor, all of them were for medical or other acceptable reasons, not just because they didn’t want to take it.

The efforts to educate the students on the importance of the test and to ensure that all capable students taking part appear to have significantly contributed to the  major improvements in results by the class of 2018.

Looking forward, Leighton doesn’t foresee many additional changes to the administration of the CAASPP.

“I’m just really proud of (the seniors) for doing what I know they’re capable of doing,” Leighton said.  “And I just want the juniors to be as great as the … seniors were (last year) and to try to emulate that because it was awesome.”

GBHS students are known for excellence and perseverance, and the current seniors’ CAASPP results vividly demonstrate that, as well as the school’s overall ability to rebound from a setback.

“That’s what we’re known for,” Leighton said, “Showing up, working hard and doing a good job.”