Breaking Down the Walls impacts students

Event encourages tolerance and acceptance of others 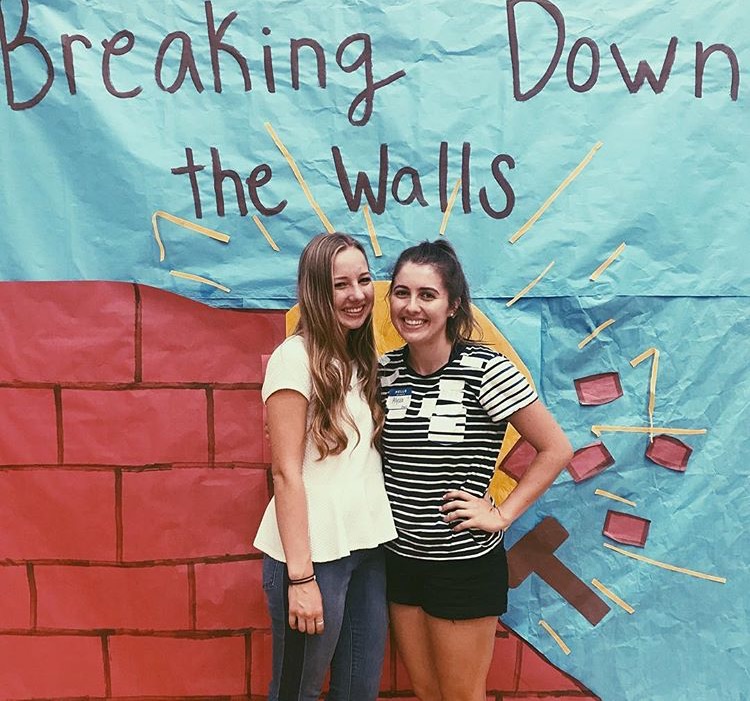 Sisters Sydney and Alyssa Sewell attended Breaking Down the Walls, both as leaders.

Many high school students across the nation feel they are generally limited by cliques, stereotypes and labels.

Although the culture at Granite Bay High School is healthier than most, many of our students say they suffer from the same limitations.

“Everyone has their own groups,” senior ASB president and Breaking Down the Walls commissioner Alyssa Sewell said. “Granite Bay isn’t really a big open campus where each student feels comfortable walking up to different kids.”

Breaking Down the Walls is a program designed to unify and empower students to create a more positive culture on campus.

GBHS had the honor of hosting Breaking Down the Walls founder Phil Boyte as its guest speaker. Boyte has spent over 20 years visiting schools around the country, inspiring students to create a supportive climate with their peers. Boyte has even written a book, titled School Culture By Design.

Over Sept. 19 and 20, GBHS invited over 375 students from different grades, backgrounds and social groups to spend a day away from classes to encourage a positive change in the school culture.

“(It was a) life changing experience,” junior and Breaking Down the Walls leader Chloe Ralli said.

“Breaking Down the walls goes by a three step process, which is (to) play, trust and learn,” Boyte said.

For the first few hours of the day, students did fun activities and shared laughs with people they didn’t know well or haven’t seen before.

“It didn’t matter what group you were from or who you were friends with,” junior and Breaking Down the Walls attendee Sydney Herrenschmidt said. “You could talk to anyone there.”

After getting early jitters out, students broke into groups of 8 to 12 led by trained student leaders. In these small groups, students were able to start Boyte’s second step — building trust.

“I loved sitting up on the top of the bleachers with Phil (and) watching students seek out shy people and connect with them,” Student Government teacher Tamara Givens said. “It was impactful to have 268 kids show up (on Wed.) when there were only 45 people signed up that morning.”

After opening up about personal topics with their groups, students were invited back into one large group to participate in an activity called “cross the line”.

In this activity, students and faculty gather in a line across the gym and the speaker asks hard-hitting questions. If a question applies to someone, they walk across the line, joining their peers dealing with similar things.

“My favorite activity we did was ‘cross the line’ because it was super impactful to see all these students cross over the line for different situations and circumstances that I never would have guessed,” Sewell said. “People that I’ve known my entire life, even my sister, crossed for things I didn’t know she was going through.”

Students and faculty then returned to their small groups, many with a lump in their throat and tears in their eyes, and were able to share things previously hidden from their closest friends.

To finish the day, groups joined together a final time to share “heart touching” acknowledgements and apologies with their peers.

“The acknowledgements and apologies made a big impact,” Ralli said.

At the conclusion of the day, many students who attended Breaking Down the Walls walked out the doors feeling united with one another.

“They’re not alone in their circumstances,” Sewell said. “(This) school is a place for people to support each other and be there for each other.”

Breaking Down the Walls was impactful and eye opening to many students involved – but did it truly change the climate and culture at GBHS?

“It all starts with smiling and saying hi to each other in the hallways,” Boyte said.

Students on campus did exactly that.

“Just a week after (Breaking Down the Walls), I definitely think it has changed the culture,” Sewell said. ”I saw kids randomly hugging each other (and) people from the same small groups waving at each other and saying hi.”

Many conclude that it is up to students to maintain the positive environment created by Breaking Down the Walls.

”Nobody wants a school culture where there is hate, bitterness and inequality, but people inadvertently do things that create negativity,” Givens said. “Watching kids getting excited about creating a positive culture is inspiring.”