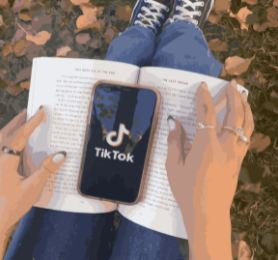 The camera was turned off. Sophia Stedman watched as her eighth grade social studies teacher spoke. But her attention was quickly diverted by the thought of making a “bookstagram”. She had been thinking about it for some time and finally she decided to “just go for it”.

Stedman’s interest in books originated in seventh grade English class when she was forced to read the hunger games.

“After reading that book and finishing that series, I kind of just went into the next series, and from there I discovered the online book community,” said Stedman.

Stedman was not the only one who was affected by this. The presence of book related content has been on a rise. Influencer @aymansbooks has seen the physical effect that social media has had on the book community. Barnes and Noble now has a BookTok section both in-stores and online. As well as many other popular book stores. With the hashtag BookTok at 28.5 million views. @aymansbooks says, “Books can go viral.”

BookTok takes inspiration from various genres such as classics, YA, fantasy, and many more.

“I definitely think it’s helped people to diversify their reading …  whether that be from different authors, different genres, or dealing with different topics.” says Stedman.

Young readers across the globe can all share one thing in common, a good book. The reading community has previously had many platforms such as Goodreads, Book Riot, YALSA, and Penguin Teen. Bookstagram and BookTok also gives an opportunity for young writers to gain traction on their books.

Michaela Horans platform focuses on popular YA and fantasy novels. She also has a book of her own, and BookTok has been a huge opportunity for her to share it.

“I had no idea that many people would be interested in my book when I started making videos about it. It was a huge shock and relief in a way to know other people wanted to read my art.”

Though BookTok has provided an exciting and creative space for readers, some influencers say that gatekeeping can be an issue in the community, like making certain forms of reading superior to alternative resources. Creator @maddielikesbooks says

“Most well-known BookTokers have giant bookshelves … BookTok portrays an idealistic image of what a ‘reader ’should look like.” Though these alternatives, e-books and paperbacks and the like, have shown promise, a lot of publishers still sell hardcovers first. This has made it harder for readers with lower income to buy these books.

Though this may be true for some, @aymansbooks says. “I feel like with any community, there are toxic moments and such like that … But people quickly come to the realization that you can’t gatekeep a book; books are meant for everyone to read. Especially diverse books, diversity means different.”