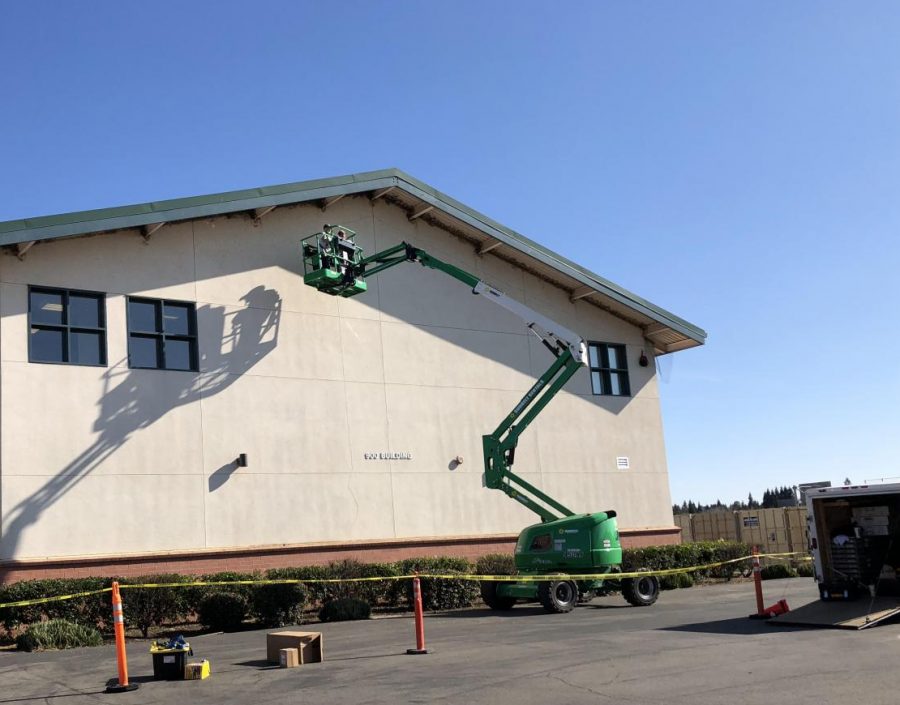 Parents of high school graduates aren’t the only ones who experience “empty nest syndrome.”

Last month, the district hired a pest control firm to take down the hundreds of swallows’ nests from the 900 building to discourage the birds from nesting there again.

“(The swallows) should not have been there in the first place because the birds have become problematic,” said Granite Bay High assistant principal Brian McNulty. “According to the letter of the law, the nests can be taken down as long as there’s not eggs in them, so outside of breeding season, it’s fine to take down mud swallows’ nests.”

What might seem like blemishes on the face of the campus’ aesthetic appeal to some fascinate Scott Braly, who teaches biology and Fish and Wildlife teacher.

“How (sparrows) build (nests) is pretty amazing,” Braly said. “They go out to the muddy areas and take one little beak at a time of mud and they fly out there and spit it out to build that amazing nest. One little mouthful at a time. And it sticks there. The saliva combined with the mud produces a pretty strong nest.”

What many people do not know is that the birds occupying the 900 building are not all native to this area.

“You also have English sparrows – house sparrows which are not a native to this country or continent,” Braly said. “When the swallows are nesting, you will also see a bunch of sparrows nesting … they don’t usually take over one (swallow’s nest) that’s being built, but they will hop in and take over one that was already there.  So it’s a mixed colony of cliff swallows and English sparrows.”

The swallows might be native to this area but certainly not to the school facilities.

“The GBHS campus is not a native nesting area for the birds,” said Kris Knapp, the director of maintenance and operations for the district. “They did not arrive until after the 900 building was erected in 2004.”

McNulty said there has been talk about providing an alternate nesting place for the birds to further discourage their nest-building on campus, but district officials have made no firm decisions yet.

“At this time we do not plan to build an alternative nesting location on the campus,” Knapp said. “The birds would be better served establishing a new location in a natural environment of their choosing. Building a nesting location could also have negative impacts on surrounding neighbors depending on where it was located.”

McNulty said the birds also pose a health hazard to students and faculty on campus.

“The problem with the birds is that they breed all sorts of viruses – all sort of sickness with their waste materials, and just by their living in the mud with the waste materials – combine that over the years … it’s a health and safety thing,” McNulty said.

Over the years, GBHS administration has received numerous complaints about the birds’ waste – and not just that of the swallows.

“Even (assistant principal Greg) Sloan got pooped on (Feb. 16) by one of the seagulls,” McNulty said. “We get complaints every day. Seagulls, geese – because the geese defecate in the grass around the sidewalk – it’s slippery. (All the birds) are just inconvenient, and people don’t like it – they think it’s gross.”

However, not everybody finds the birds a nuisance. Braly, who was a wildlife management major and natural resources major in college, has always had a deep passion for ornithology.

“I find them very fascinating,” Braly said. “They are incredibly awesome creatures.”

But even Braly acknowledged the district’s efforts are useful.

“The birds weren’t nesting there until we built that building,” Braly said. “If we had a cliff structure that they were nesting in on campus, then that would not be OK if we prevented them from using that. But they have been using that building for about 10 to 12 years now.  It’s not great – it’s nice to see them, it’s fun, but it’s a health hazard, (and) it’s a mess.”

Senior Katie Kantola finds the birds’ presence of tremendous value to the school and its inhabitants.

“I was appalled that our school would do such a thing,” Kantola said. “Being surrounded by nature, I thought (the district) would jump at the opportunity for students to learn from them. They are very interesting birds. I know what it takes to build those nests and how long the process is. And that is their home. That is where they raise their (chicks). They want to live their lives just like we do, but we just made a lot of lives harder by removing the nests.”

Not only did workers scrape down the swallows’ nests, but the plan is to put in place a net that would prevent the birds from nesting underneath the eaves of the 900 building.

According to Knapp, the district has been thinking about taking down the nests for the past 10 years or so. In fact, this is not the first attempt to discourage the bird population on campus.

“Years ago when we complained that all the baseball patrons were getting ‘bird-defecated’ on, the district came out and put up some netting, but it really didn’t do the job,” McNulty said. “It wasn’t in a big enough area, and the birds just worked around it.”

The new netting will supposedly be placed farther down  and cover a greater area of the wall, but McNulty said this won’t stop the birds from trying to build their nests right up against the bottom of the net. Therefore, the district has further plans to continually deter the swallows.

“I was told that our maintenance and operations have been directed that when the birds start to build to knock the nests down before they can move into it,” McNulty said. “So it’s going to be kind of an ongoing job this spring.”

So if the swallows are discouraged from nesting in the 900s building, where will they go instead?

“It could be into another one of the school buildings like the theater on the other side,” McNulty said. “But if we knock them down continually during their build season this year, they probably won’t come back next year.”

Even though Knapp confirmed that all actions taken by the school complied with the birds’ protected status, Kantola said she finds this ongoing project extremely unethical and destructive to the swallows. Like Braly, she appreciates the skill and time it takes for the birds to build their nests.

“(The school district) will kill the flock,” Kantola said. “Some will move on, but others won’t. They stick together. It takes weeks to build a nest. On top of that, they have to fly to get the mud. They fly within a mile radius of the spot. This is animal cruelty. They are forcing animals out of their homes – to move on – making birds homeless.”

Kantola considers herself a nature lover and sees the birds not as pests but as sentient beings.

“I find birds very appealing, just because that is how I am,” Kantola said. “But a health issue I don’t get –  birds poop on the ground all over the quad, does that mean we should get rid of the gulls? No – the birds probably thought we were a nuisance as well. Does that mean they are going to kick us out? They are equal to us, and we to them.”

Whether students and faculty like or dislike the presence of swallows on campus, the nest removal project will continue to push on.

“We want to try to keep this school as safe and as clean as possible for safety purposes, for the community’s health and welfare,” Braly said. “That’s what the school district’s bound to do.”