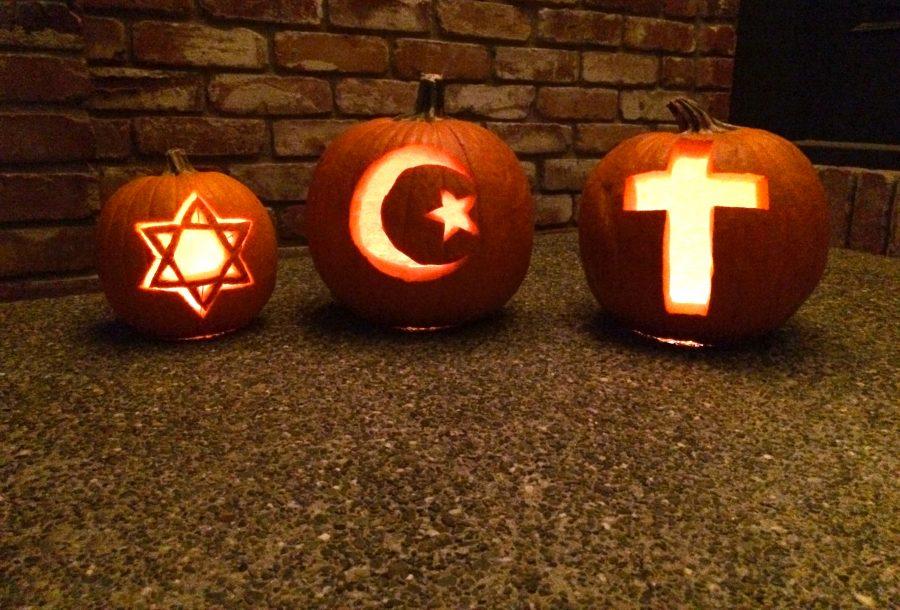 When the sun goes down, darkness fills the sky. But on this day, parents don’t send their children off to bed. It is the one day of the year where the streets are busier at dusk, where glowing houses and jack o’lanterns help the stars brighten the night.

With the abundance of costumes filling the streets, it can be easy to forget Halloween is not celebrated by everyone. But while vampires feast on their assortment of candy and heroes fly from house to house, others wait quietly for the night to be over.

As a Jehovah’s Witness, sophomore Ricky Frank has grown up in a family that doesn’t celebrate any holidays, including Halloween.

“Usually on Halloween what we do is we shut off all our lights and make sure there’s no TV on,” Frank said. “(We) have all the lights off so no one thinks we’re home.”

Although describing his religion used to be awkward, Frank said he no longer minds explaining why he doesn’t partake in Halloween. However, not everyone is willing to listen.

A few years ago, a group of teenagers walked up to Frank’s house to ask for candy. Because they weren’t celebrating, Frank’s family didn’t have any Halloween candy available.

“We said no, so they came back later that night and egged our house,” Frank said.

Even though the egg disaster was a hassle to clean up, Frank said he doesn’t mind not celebrating Halloween.

“I don’t really know what I’m really missing,” he said.

In fact, knowing the dates for any holiday has never been important to Frank. Frank said the only holiday he remembers is New Year’s Day, simply because it is easy to identify the first day of the year.

Granite Bay High School student Juan Flores, who identifies himself as a Roman Catholic, is not particularly excited for Halloween. But rather than overlooking all holidays, he celebrates All Hallows’ Eve, which also falls on October 31.

“While All Hallows’ Eve is a day to … commemorate the saints of the Holy Catholic Church,” Flores said, “Halloween is a pagan holiday which celebrates dead spirits.”

Flores said that when Halloween enthusiasts come knocking on the door in hopes receiving candy, his family won’t open the door.

Although Flores doesn’t celebrate with traditional Halloween customs, he did take a small part in what many Americans are familiar with seeing on October 31.

“I did (participate) once by dressing up as a saint,” Flores said, “but in the name of All Hallows’ Eve, not Halloween.”

But more often, Flores and his family have very different traditions from the ceremonies commonly held on this date.

“We do something fun together related to the saints,” Flores said, “or (we) go to the mass for All Hallows’ Day or All Saints’ Day, which is November 1.”

As the end of October approaches, Halloween decorations continually pop up in stores and in classrooms. To those who don’t celebrate Halloween, these adornments can appear inconsiderate and distasteful.

“I feel offended (when) teachers, or whoever, decorate for Halloween or celebrates Halloween,” Flores said, “but they don’t do anything for All Hallows’ Eve.”

The origins of Halloween began with Samhain, an ancient Celtic festival. The festival took place on the day before the Celtic new year, November 1st, when the Celts dressed up in costumes to help their priests predict aspects of the future.

The day of the festival, October 31, later developed into Halloween and All Hallows’ Eve. November 1st became All Saints’ Day.

Although many people are accustomed to Halloween ritual, they are not familiar with the history behind Halloween.

“It’s really saddening (when) there’s somebody who celebrates something,” Flores said, “and they don’t know why they’re celebrating it.”

But it is more than just being unaware of history that bothers Flores. It is the holiday in and of itself that Flores doesn’t agree with.

“All non-Catholic, non-Christian religions are really worship(ing) false Gods and they can … be demons,” Flores said, “so I could say Halloween is a satanic holiday with that logic.”

While some despise the recognition of Halloween, others look forward to celebrating it, perceiving Halloween as a holiday set apart from religious or secular beliefs.

“I’m really looking forward to seeing … what is the difference between China and … America,” Cheung said. “So if there is really kind of a festival activity, definitely I will enjoy (it).”

Cheung said although there are festivals in China, holidays such as Christmas and Halloween are not as widely celebrated as they are in the United States. Since his arrival, Cheung has been learning about different Halloween customs.