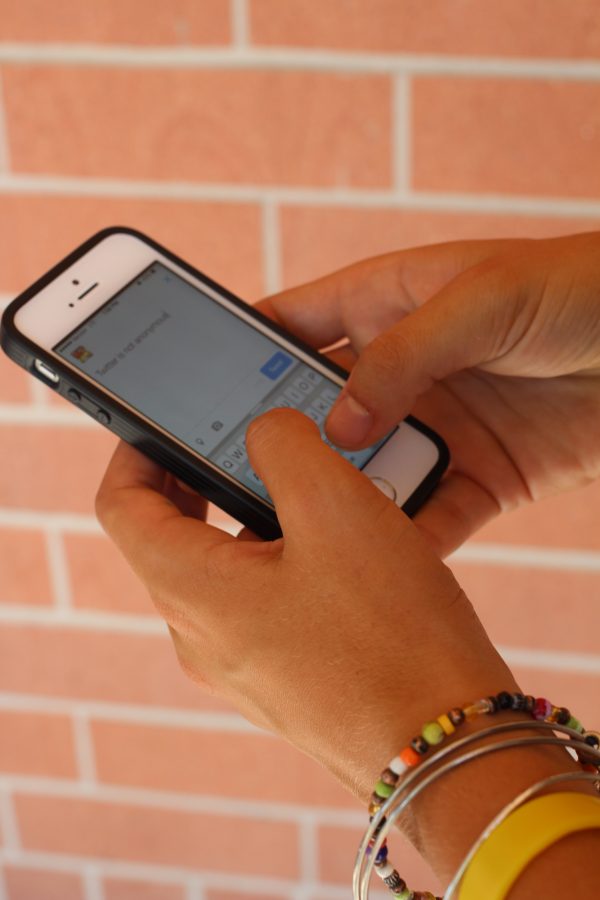 Many Granite Bay High School students will often turn to social media, such as Twitter, as an outlet for their thoughts. Because publishing their thoughts might be threatening to their reputation, some attempt to remain anonymous.

Lately some Twitter accounts have been calling out individuals and spreading negativity as they keep their identity protected, while other anonymous accounts are doing just the opposite — recognizing people for making the school what it is.

GBHS Principal Jennifer Leighton said she is bothered by the negativity that is anonymously displayed on Twitter by some students.

“They can just say what they want without repercussions,” Leighton said.

Having been mentioned by anonymous Twitter accounts before, Leighton feels empathetic towards those who are victims of it.

Leighton said that she doesn’t spend much time on Twitter looking for the negativity.

“I try not to (look for negative tweets) because it upsets me quite a bit,” Leighton said. “If there were something I could do about it, I would (do it).”

Last year, Leighton was bluntly victimized by several students who caught onto the “impeach Leighton” hashtag. When she became aware, she tried to not pay too much attention to it and avoided giving power to the matter.

Leighton knows that there still might be more that she is unaware of and is bothered by how students will so easily latch onto something that is so negative.

“I think it creates a bit of a mob mentality where people start piling on,” Leighton said.

When it comes to the positive anonymous Twitter accounts, Leighton has the contrary opinion. There are some GBHS students who prefer to spread kindness namelessly.

“I feel really proud of those kids for feeling that passionately about wanting to start a positive movement,” Leighton said.

The owner of the You’re Worth It (@gbhotline)  account on Twitter anonymously opened up in an interview. The GBHS junior hopes to provide support for people who need it and for these people to be able to open up to the account in return.

“I really struggled through anorexia and depression and other mental illnesses,” the anonymous junior said.  “But I always had a support group… I wanted to be able to be that for those people.”

According to the student, the account is anonymous so that this person’s personal history with mental illnesses is not revealed and so that people can feel more comfortable opening up.

The student “abhors” the negative accounts that people create and believes that people misuse their right to free speech.

With high hopes for the future of the account, the student is passionate about the goals and intentions of it.

GBHS drama teacher Kyle Holmes, believes that the positive anonymous accounts tend to be a reaction or a response to the negative ones.

Holmes, another victim of an anonymous Twitter account, encourages his students to report any hostility that contributes to the “negative energy” at GBHS.

According to Holmes, students would rather complain about school, teachers and the administration anonymously than confront an issue directly. He believes that there is a better way to go about these conflicts.

“The right way to handle it (is by)… following a real chain of command and not anonymously hiding being your phone and expecting change to happen, because it won’t,” Holmes said.

While Holmes appreciates the thought behind creating positive accounts, he is concerned about the risks that come with anonymity. He feels that high school students aren’t legitimately qualified to help other students with issues that a psychologist or psychiatrist would typically treat.

Holmes also believes that another risk is that students might privately share information with these anonymous accounts that ends up needing further attention from parents and teachers.

“You have to know when it’s time to get adults involved,” Holmes said.

Although students have tried to create more positivity with some Twitter accounts, Holmes is still baffled by the concept and reasoning behind the negative ones.

Holmes said. “It’s unfortunate that we live in a society where we think it’s acceptable to hide behind anonymity.”