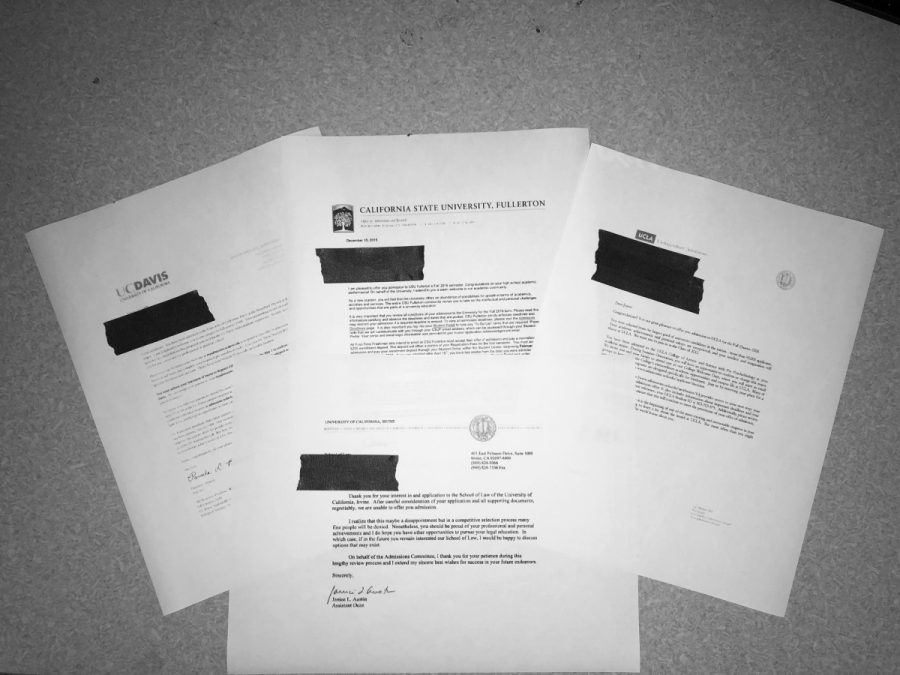 For the high school graduates of 2018 planning to attend college, the admissions process this year was more competitive than ever – and unkind to many.

The cherished University of California system was denounced by many students for denying a substantial number of in-state applicants who were more than qualified – and who the system is supposed to favor.

Granite Bay High senior David Song, who was accepted to Stanford University in December, was rejected by UCLA and waitlisted at UC Berkeley and UC San Diego.

“(The) UC craziness kinda sucks this year. … I am curious to see what truly happened,” Song said.

A multitude of seniors at GBHS who had nearly perfect SAT or ACT scores and GPAs above 4.0 were – against all odds – denied by various UC schools.

“I was both disappointed and surprised that I didn’t get (into any UCs),” senior Adam Fong said. “With my test scores and GPA, I assumed I’d land at least one, but I got waitlisted at UC Irvine, UC Davis and UC San Diego, and denied at UCLA and UC (Santa Barbara).”

Five out of the nine UC campuses received more than 100,000 applications – an average of a six percent increase in applications over last year.

According to a UCLA undergraduate admissions officer who requested to remain anonymous because of citing unofficial statistics, only 200 students out of 120,000 were waitlisted for the Class of 2022 at UCLA.

“Politics, money, bias – whatever it might’ve been – I can’t do anything to change the decisions,” Fong said. “It’s also humbling knowing that there was more work to be done, given I didn’t qualify with my current status.”

But it wasn’t just the UC system that baffled many – there were surprises from state schools all the way to the Ivy League.

“I was very surprised when I got waitlisted at (Cal Poly San Luis Obispo) and UCSD,” Forbes said. “I thought that I could at least get into those schools (as) I kind of considered them as safety schools.”

Senior Victoria Ahmad, who has a 4.3 GPA and a 1,480 SAT score – which is in the 98th percentile of all national test takers – was surprised to be rejected by Cal Poly as she considered it one of her backup schools.

“I was pretty shocked because my stats were a lot higher than (Cal Poly’s) averages for my major, and it made me scared for the results of other schools,” Ahmad said. “I still don’t understand (what happened with the admissions decisions), because most schools usually admit the most qualified applicants, not the applicants they think are most likely to attend.”

Even schools that students would typically expect to get into were baffled by their rejections.

University of Southern California normally retains around a 17 percent acceptance rate, but this year, that rate plummeted to nearly 12 percent, rejecting tens of thousands of qualified students.

Many GBHS students who had test scores and GPAs well above USC’s listed averages were rejected.

“It sucked watching my friends be confused by why one person was getting in over the other when they had almost identical stats and extracurriculars,” senior Katie Harmeier said.

Less surprising – but still astonishing – Harvard University, considered by many to be the best university in America, dropped its regular decision acceptance rate to just under three percent, among the lowest acceptance rates of schools in the nation.

A majority of the other Ivy League schools also lowered their acceptance rates for this year.

Overall, this application year seemed to be extremely competitive and confusing for prospective college students.

“It was weird watching people who got into Ivy League (schools) but got waitlisted at UC Davis try to make sense of it all,” Hartmeier said.