In light of the national holiday dedicated to celebrating Columbus, many reflect over the ethics of honoring the controversial historical figure. 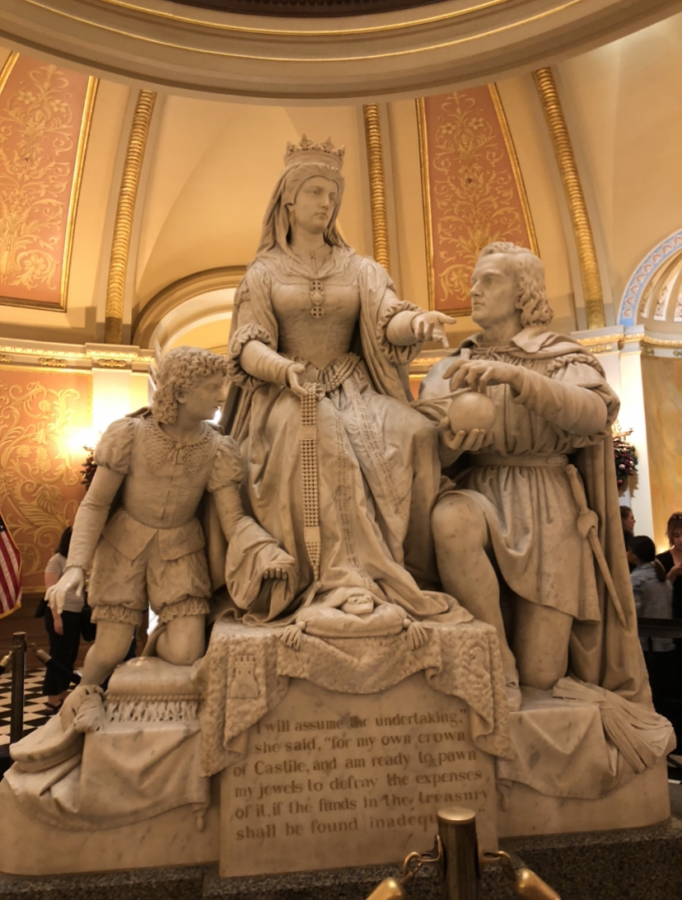 The Columbus statue in the state Capitol's Rotunda was taken down over summer to remove display of the explorer who had a deadly impact on native populations.

First being celebrated in 1792 and then becoming a federal holiday in 1937, Columbus Day has been a staple holiday for many Americans for centuries.

However, dating back to 1989 in South Dakota, the second Monday of October became recognized as Indigenous Peoples’ Day to combat the idea of covering up the pillaging carried out by Columbus against Native Americans when he was in the Americas.

With controversy surrounding his name anywhere one may turn, there will be mixed opinions no matter where he’s mentioned.

One student with strong opinions on Columbus and Columbus Day is Kalli Zasso, a junior at Granite Bay High School.

“I just think that Christopher Columbus is not someone deserving of respect in general and definitely not deserving of an entire holiday,” Zasso said. “He didn’t discover the Americas, and in colonizing this land he destroyed the lives of most existing Native Americans.”

Although having strong negative opinions towards Columbus, Zasso is still understanding as to why people might praise him.

“I think he pretty obviously dedicated a lot of time and effort into colonizing the Americas, and that’s something that could be respected,” Zasso said. “I completely don’t agree with how things were handled by him, but I can understand why people defend him due to his work.”

Besides just Columbus Day controversy, across America statues of Christopher Columbus are either being removed by the city they reside in or removed forcefully by those who oppose the Italian explorer and his actions.

On July 7th just earlier this year in Sacramento, a statue of Christopher Columbus and Queen Isabella was removed from the rotunda of the Capitol building.

The statue had been taken down in order to pay respects to the Indigenous lives lost due to Columbus and his crew as well as those who were forced to convert to Christianity.

There was pushback for the removal of the statue, however. Although his nationality may not matter to some, for those prominent in the Italian community, Columbus is an incredibly significant historical figure as he represents Italy as a great Italian explorer.

Cerruti as well as other members of the Italian Cultural Society protested the removal of the Columbus statue in Sacramento, however it was removed anyway just days after their protest.

Cerruti believes that people often misunderstand who Columbus was in his lifetime.

“(People are) blaming Columbus,” Cerruti said. “Columbus is like a carpenter who builds a door and is blamed for the actions of everyone who walks through the door.”

Although there are people still fighting towards keeping the celebration of Columbus alive, across the country many more cities, counties and states are taking steps to acknowledge the history behind the figures that are taught in schools.

Jill McKinney, the Ethnic Studies teacher at GBHS feels very strongly towards Columbus Day as well, as she sees Columbus Day as representative of genocide and atrocities waged against Indigenous Peoples.

“To many, Columbus signifies oppression, hate, and genocide,” McKinney said. “I personally do not want displays of oppression in public spaces.”

McKinney also wants to push for people to know what has been incorrectly taught or what they may have been misled into believing about Columbus.

“As the scholar Edward Said noted, ‘Nations are narratives.’ For too many, this country has been a narrative that started with the myth of Columbus,” McKinney said. “It’s time to hear other voices. The story of Columbus is not even one of the United States; he never stepped foot on United States land. Yet, he is taught in every elementary school classroom in the country and viewed in the curriculum as a hero. A hero for whom, is the question that truly needs to be answered.  Our histories need to diversify and give voice to the historically silent.”

While McKinney may not agree with Columbus Day either, she recognizes what he may mean to other communities as well.

“I do not think that monuments or statues should be destroyed; they could be placed in museums,” McKinney said, “Yet, I understand that for some, especially Italian-Americans, he represents the important values of risk and discovery that are at the heart of the American dream. It is a necessary conversation that needs to take place on a national level as well as in classrooms.”

Leaders and protestors are pushing for recognition of the groups who were affected and continue to be affected by the past actions of historical figures often praised.

There will always continue to be backlash from both sides, however as it stands going into the future, America will most likely continue to fight to be more careful with who is chosen to be commended.