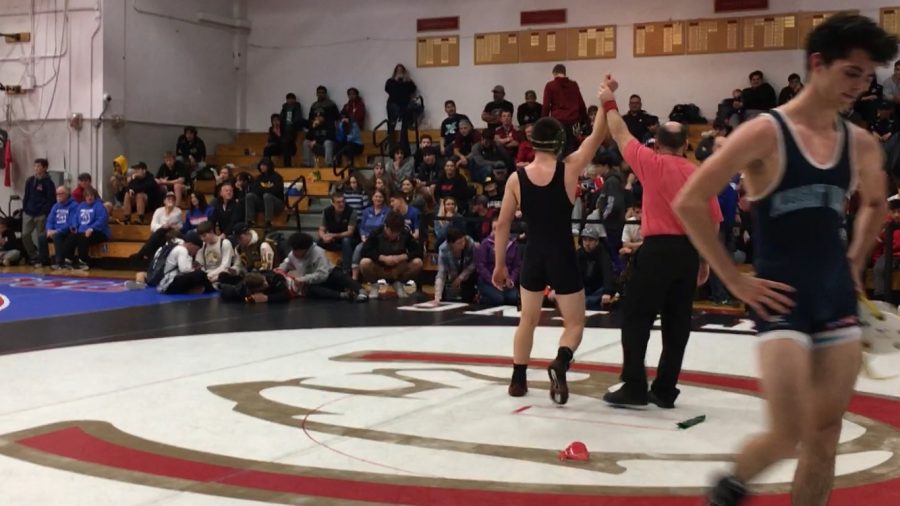 Kai Niimi gets his hand raised after winning in his finals match at the Joe Rios.

At the beginning of his freshman season in 2015, Kai Niimi stood at 5 feet 2 inches, and weighed 150 lbs. With three years of experience wrestling in middle school, he wrestled most of his matches on the junior varsity team.

In February of 2019, he won three matches at the CIF State Championships, the toughest wrestling tournament in California, at 120 lbs.

But he wasn’t always this good. Niimi said his first goal for freshman year was to lose some weight.

“I was this little pudgy kid rolling around on the mat,” Niimi said. “I just (didn’t) want to look like (that) anymore.”

After a tough loss at his first varsity match, Niimi started to realize what he had to do consistently to lose the weight.

During his sophomore and junior year, Niimi started training with his teammate, Teague Dilbeck, a two-time state qualifier who was a year older and a weight class above him.

Though he was grateful to have a partner like Dilbeck who was aggressive and hard on him, Niimi said that getting beat up every day made him question his goals sometimes.

“(Dilbeck) just does not stop. He’d just beat the crap out of me every single day,” Niimi said. “There were times when I asked myself why I (was) doing this sport. Not only is wrestling such a physically challenging sport but also mentally and emotionally draining. Looking back, I know I could not have been the wrestler (I am) without Teague to push me and (…) challenge me in that manner.”

Despite the challenges, according to coach Miller Cenat, even if Niimi was losing, he’d take direction well, and he´d go into the situation he was in and make the best of it.

“He works through his problems,” Cenat said. “He´ll try a move two or three times and on that fourth try he gets it.”

By the beginning of his senior year, Niimi had lost almost 30 pounds since his freshman year, and had qualified for the section tournament during his sophomore and junior years.\

Though Dilbeck had graduated, Niimi had a new drilling partner in his younger brother, Talon Niimi, who had recently joined the wrestling team as a freshman and had many years of wrestling experience under his belt as well.

Kai said it was tough after Dilbeck graduated because Dilbeck wouldn’t let him get a move unless he was doing it right, which showed him right from wrong. Kai was grateful to have skilled wrestlers on the team like Talon and sophomore Gabe Jensen to work out with.

“(Kai and I) are more compatible,” Talon said. “We have a strong connection, (…) we look out for each other in this sport, he’s helping me and I’m trying my hardest to help him.”

However, a large obstacle in Kai’s final season was his growing shoulder injury. In the league finals match, while wrestling an opponent from Whitney, Kai´s shoulder was suddenly dislocated.

“When I heard Kai yell, as a mom I knew something (was wrong) because he never wails out like that,” Mrs. Jenny Niimi, Kai´s mom, said.

Despite that, Kai went out and wrestled until the end of that match, and two weeks later he found himself at the section tournament. It was when he got his first loss of the day when Kai realized he had to step up his game one last time.

“At that point I was really getting down on myself,” Kai said. “I was a match away from not qualifying for state. The thing I´d been working up to for four years (was) threads away from slipping out of my hands and I (would´ve) never gotten this opportunity again.”

Kai went on to win his next six matches and qualify for state, and his final match of the day was for third place, against a wrestler from Oakdale.

“I was expecting a really tough match, and it’s not like it wasn’t difficult,” Kai said. “I ended up pinning him, (…) and that’s where it let loose.”

“Seeing him emit so much joy and excitement for someone who is (normally) calm, cool, and collected, it was really cool to see that he (was) excited about going to the state meet,” Cenat said. “He had a realization that he did something big.”

Kai ended up winning three matches at the state tournament in the 120 pound weight class.

After high school, he plans to wrestle one year at either Sierra or Sacramento City College. After that, as a member of the Church of Jesus Christ of Latter Day Saints, he will go on his mission for two years before finishing community college then wrestling at Southern Virginia University, a Division III school.