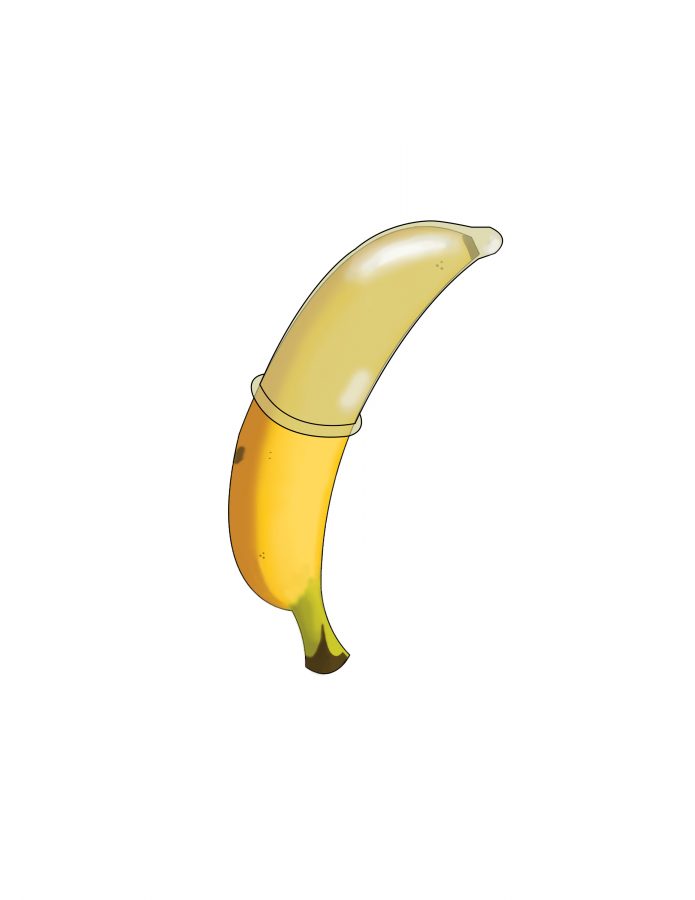 Fewer than half of American high schools teach all 16 topics determined essential by the CDC – ranging from sexually transmitted disease and pregnancy prevention to how to obtain condoms.

Granite Bay High School’s health and safety program, while more thorough than most, still doesn’t fully teach all 16 topics. There is one that does not get comprehensive treatment – how to correctly use a condom.

With the exception of health and safety teacher Kathie Sinor, GBHS teachers do not provide a physical demonstration of how to put on a condom in their classrooms.

And while a demonstration isn’t necessarily required, Sinor thinks it helps add to the understanding of  students.

“Visuals are always good,” Sinor said. “You can talk about something, but isn’t it more effective when you actually see it?”

GBHS seems to be following national trends. Only 54 percent of American high schools teach students how to correctly use condoms.

For health and safety teacher John MacLeane, the demonstration is not a part of the curriculum – and a demonstration can cause more trouble than it’s worth.

“We verbally go over condom use, but we don’t demonstrate how to use condoms,” MacLeane said. “We live in a pretty conservative area, and  a lot of the parents (would object to it), and so if you’re going to pull a student out of my class for two weeks (during the sex education portion of the course) because I’m going to do a condom demonstration, … I’ll give (it) up … to keep them in my class.”

MacLeane also said he’s hesitant to include condom demonstrations because the sex education portion of the heath course curriculum can be tense for freshmen – and as far as he’s concerned, verbal instruction is sufficient.

“(Including a visual demonstration is) not something I’m comfortable with doing,” MacLeane said. “To quote one of my friends, ‘It ain’t rocket science.’ As long as you know the precautions … it’s really not difficult.”

Junior Kendall Smith disagrees. Smith was in MacLeane’s class as a freshman, and she’s not sure she learned what she needed to know.

“Freshman year, if someone gave me a condom and said ‘put this on,’ … I’d probably put it on wrong,” she said. “I had never done anything like that when I was a freshman, but I feel like I wouldn’t have known (because) the curriculum never taught me that.”

In fact, the demonstration itself can be “normal,” as Avisha Shah, a freshman who just completed Sinor’s class, described it.

“(Mrs. Sinor) didn’t really make it that awkward,” Shah said. “Definitely a few (kids) slumped down in their chairs and a couple looked away, but I think the majority of us just sat there and watched.”

Although it might be uncomfortable for students, according to Sinor, it can lead to a more candid view of sex in the future.

“Are people going to be uncomfortable?” Sinor asked. “Well, (the condom is) only on (my) fingers. It’s not like I’m doing it on a banana or … a model of a penis. … But I think it’s effective (and) kids will respect (me) for it because they know that (I’m) comfortable with it and (it) sends the message to students that I’m comfortable talking about it.”

But the comfort level of the teacher is not necessarily the reason why most teachers do not include a condom demonstration for their classes.

“I certainly had that demonstration and chat with my two sons. I don’t feel uncomfortable talking about it with my children, that’s my job as a parent. I don’t want to step on the toes of parents who feel like that is their priority on the topic.”

However, according to Smith, by doing avoiding the demonstration, teachers can close themselves off from possible student questions.

“I’d rather (students) come to somebody who knows what they’re talking about rather than someone who doesn’t,” Smith said. “(Teachers) should have their students feel comfortable to come to them about that sort of thing.”

Still, there are certain things health teachers cannot discuss with their students.

“There’s a movie called ‘Teachers,’ where a teacher actually gives a student a ride to (an abortion clinic),” MacLeane said. “And of course, gets fired for that, as they should.

“I’ve had one student ask me to take them to a doctor. … They thought they had testicular cancer and there was no dad, just a mom. Instead, I phoned his mom and gave her this information, and she made an appointment. I will connect (students) with the information that they need.”

Terry Stafford, who also teaches health and safety at GBHS, attributes the discrepancies in instruction to different teaching styles.

“Whether it’s our sex-ed unit, or our decision-making unit, everyone teaches it a little bit differently,” Stafford said. “There’s no right or wrong way to do it.”