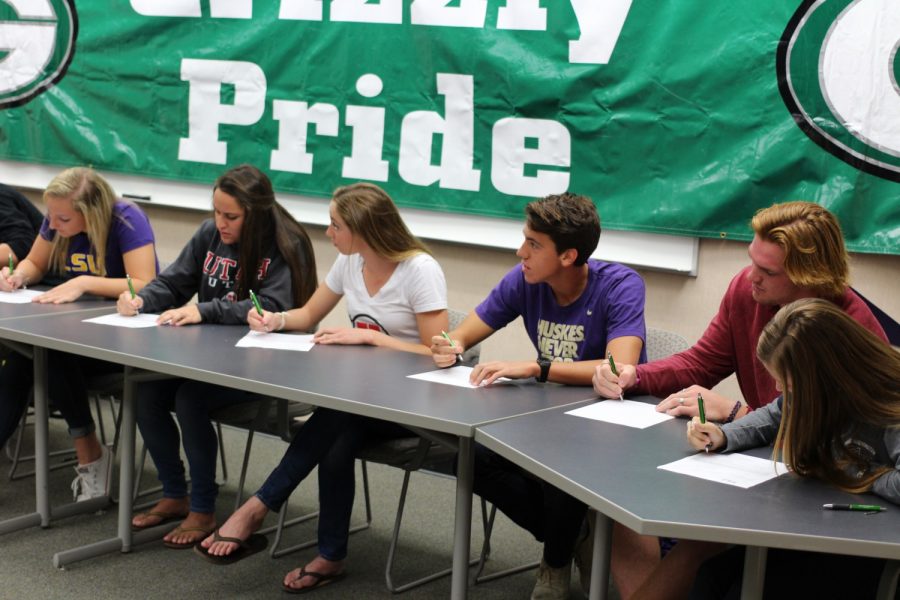 For many, high school marks the end of one’s athletic career, excluding the casual pickup game or intramural competition. For a select few, however, the transition from high school into college is just the beginning.

The college athletic process doesn’t start merely in college, but long before in hours of training throughout players’ youth, honing the skills necessary to compete at the next level.

Combined with the time and effort required to develop into a prospective collegiate athlete, natural talent is required to compete at the top level.

Rare as this combination may be, Granite Bay High School is notorious for consistently sending anywhere from 15 to 25 student athletes to compete at this next level.

The signees were athletes from a range of different sports including golf, soccer, crew, football, swimming and lacrosse.

Senior Riley Brown committed to the University of California Berkeley on scholarship as a crew coxon.

“I was nervous (to sign) because I have waited for this for a really long time, but I was very excited,” Brown said.

Brown said that mixed with her excitement was a feeling of relief to have finally picked a school and know it was official.

Not uncommon among recruited athletes is the process of having to narrow down one’s choices from a pool of schools interested in committing them to their program.

In Brown’s case, multiple other prestigious schools including Duke and Columbia offered her spots into their programs, leaving her with the task of selecting the school that would fit her the best.

“I’m really a west coast girl and as cliche as it sounds, I really love California and Berkeley is so me,” Brown said, explaining her choice.

Though Brown is choosing to stay in California, there was a diversity of schools picked by the recent signees with universities located all around the country.

“It was very relieving to finally sign on signing day,” Stabbert said. “But at the same time, it was kind of anticlimactic because I had built it up so much in my head since I was little and all you do is sign a piece of paper.”

This is not uncommon in college-level athletes – having worked for their goal for a number of years, sacrificing activities of a “normal kid” to pursue their sport.

“A ton of work went into (the process),” Stabbert said. “I have sent hundreds of emails to college coaches since sophomore year and have been traveling around the country playing travel ball and going to showcases every summer since seventh grade.”

Athletic Director Tim Healy has had the opportunity to watch GBHS athletes such as Brown and Stabbert commit to their college of choice, and sign their official document sealing their future.

Healy said that GBHS is special in the sheer amount of student-athletes that have come through the school’s programs and are collegiately bound.

“Some of your private schools might be closer to six to 10 (athletes sign per year) that have programs that are more in line with where ours are, but I don’t know any other school in our area that regularly gets (anywhere close to our multitude),” Healy said.

In turn, GBHS athletes who sign national letters of intent are not only solidifying their own athletic accolades but also honoring the school by adding to its list of athletes and continuing its prestigious history as an athletic powerhouse.

“To be a scholarship athlete, you don’t just exist as an athlete; you have to really be an athlete,” Healy said. “Your intensity is different than a casual athlete and I don’t think – unless you are at the top of that pyramid – you really (….) get it.”

Though some will argue that other schools outrank GBHS in terms of athletic achievement, none can argue that GBHS does not produce total athletes.